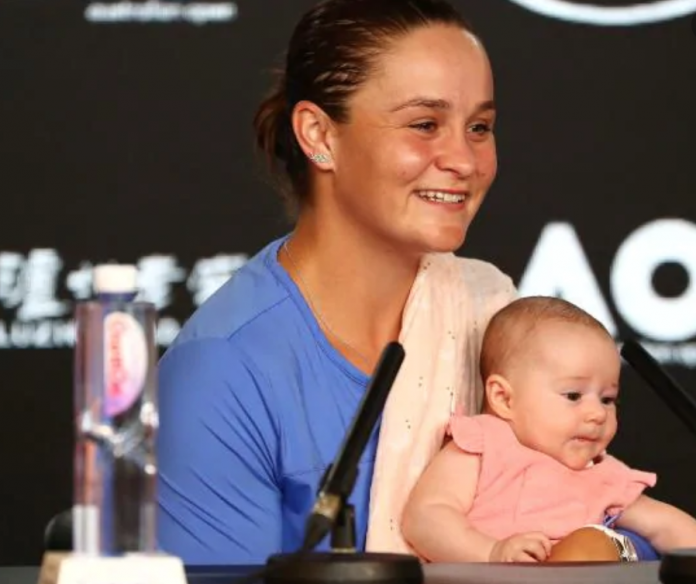 CAN THERE BE BEAUTY IN UGLINESS? Greg Couch wrote, “Federer’s win over Tennis Sandgren was one of my favorite matches ever. He’s usually so graceful, but his body broke down. Couldn’t run or swing hard. It was sad thinking how old he is. He came to net, he dinked. One point from losing so many times. Beauty in ugliness.”

Despite a blazing start in which he went up 4-1 in the first set of his semifinal against Novak Djokovic, Roger Federer said he went into the match thinking he had a three percent chance of winning. But, he added, he thinks he can win a Slam, although it’s more likely he’ll win the tourney in Halle, Germany or his hometown tourney in Basel. BTW: He started using a John McEnroe term frequently, “to be honest.” He used it five times in his press conference last night.

LIFE IS A BEAUTIFUL THING: One of the sweetest moments in the history of sports press conferences came in 2015 when Steph Curry’s two-year-old daughter Riley stole the show at a Warrior presser. After she lost to Sofia Kenin, Ash Barty came into her press conference holding her tiny, darling niece Olivia. When we asked Ash if Olivia, just a few months old, had comforted her after she lost her match to Sofia Kenin, the Aussie said, “Perspective is a beautiful thing. Life is a beautiful thing. Olivia brought a smile to my face as soon as I came off the court. I got to give her a hug. It’s all good.”

“Tennis is all about pressure and when you apply it.” – Australia’s Channel 9

“There are a lot of holes in Stan’s game now – it’s Swiss cheese.” – Sam Groth on the fading Stan Wawrinka

“If you have just one coach, you’re a nobody.” – Chris Fowler

“My baby’s entourage is bigger than mine.” – Bob Bryan

“I said if Zverev doesn’t win a Slam in the next two years, I don’t know anything about tennis. Well, the two years are about up.” – John McEnroe

“Zverev hasn’t lived up to his billing. He knows it, everyone knows it. So his shoulders have gotten a lot heavier.” – John McEnroe before the German reached the semis

“I was a feisty kid. That hasn’t changed a lot.” – Sofia Kenin

“The internet is so – you don’t feel a human connection.” – Naomi Osaka

“Sometimes he likes to admire his work a little bit too much.” – Jim Courier on Nick Kyrgios not sprinting back into position after hitting a great stroke

“She didn’t speak and that‘s probably a good thing.” – Steve Pearce on Margaret Court not being given a microphone when she was honored on Laver Arena

WE ARE NOT ROBOTS: Ernst Gulbis confided,“I have tears in my eyes for no reason…Maybe [it’s fatherhood]. It’s strange. I was watching this French guy, [Constant] Lestienne, and he was crying on court when he won his first round of qualies, and I started to have tears in my eyes. I was so happy for him. I like these emotions – otherwise you feel like a robot.”

LOWER MY TAXES: Before her match against Sofia Kenin, the president of Tunisia called Ons Jabeur to wish her luck. The call brought to mind the time Venus Williams spoke by phone to President Bill Clinton after she’d won the US Open. Venus asked him to lower her taxes.

GO FIGURE: Tennys Sandgren plays tennis, but Dominic Thiem plays an individual sport…If 15-year-old Coco Gauff were a year younger she could have gotten into the Aussie Open Kids Zone…An American woman has made it to the semis of a Slam in 21 of the last 23 Slams. The last US man to reach a Slam semi was John Isner in 2018.

Roger Federer Will Always Be the Greatest, Even If He’s Not

AUSTRALIA IS OPEN: Aussie authorities are already trying to rebound from the bushfires. Their theme is “Australia is Open” for visitors. They point out that the fires were in only a small fraction of the country. They were far from most of the island nation’s attractions, and people should holiday here. So far, 1.5 billion dollars have been raised from various sources for fire relief.

SOMETIMES IT’S GOOD NOT TO BE BAD: After one of his early round matches, Rafa said, “I was just trying to not do something very good, but not doing something very bad.”

COURT REPORT: Martina Navratilova was abruptly cut off when she climbed into an empty umpire’s chair on an outside court to call for Margaret Court Arena to be renamed for Evonne Goolagong Cawley. She spoke for about ten seconds before the microphone cut out. Martina and McEnroe both made statements critical of Court’s positions. McEnroe said, “There’s only one thing longer than the list of Margaret Court’s tennis achievements. It’s her list of offensive and homophobic statements. Just a few examples. During the apartheid regime in South Africa, she said, ‘I love South Africa. They have the racial situation better organized than anyone else.’ What? About transgender children and LGBTIQ: ‘It’s all the work of the devil…tennis is full of lesbians…it is sad for children to be exposed to homosexuality.'”

Tournament authorities were critical of Navratilova and McEnroe. “We embrace diversity, inclusion and the right for people to have a view, as well as their right to voice that view. But the Australian Open has regulations and protocols with respect to how any fan, player or guest can use our facility, the event and the global stage it provides. This is to ensure the integrity of our event.

“Two high-profile guests have breached these protocols and we are working through this with them.” McEnroe and Navratilova both apologized and there were indications that they might have been in danger of losing their credentials.

IRON MAN: The AP noted that Federer has played 1,513 tour-level matches and not retired midway through one. He’s played 421 matches at majors and not given his opponent a walkover.

FEDERER REMEMBERS: Federer recalled that when he first came to the Australian Open in 1998 he beat Michael Chang, and now Michael is coaching against Roger (as a member of Kei Nishikori’s camp), and Chang’s kids are friends with his kids.

A CHANGE IS GONNA COME: When asked when a member of the ATP’s Next Gen will break through and win a Slam, Novak Djokovic said, “They’re literally one set away. On any given day, in the near future that can happen. It’s going to happen; it’s inevitable.”

TENNIS’ CUPS RUNNETH OVER: The other day tennis enjoyed another dandy cup of Coco. Translation: Coco Gauff won another highly hyped match. And speaking of cups, tennis has plenty of them. The Laver Cup has hit tennis like a bolt. Team Euro, led by Roger Federer, who owns the Laver Cup, has won all three of them, including the one in Geneva in September. Spain, with a huge home-court advantage, rolled to victory over Canada at the Davis Cup (also called the World Cup of Tennis) in Madrid in November. And Serbia, led by ATP Player Council president Novak Djokovic, won the inaugural ATP World Cup in Australia in front of many zealous Serbian ex-pats. It’s hard to imagine going on with three cups being played within about 15 weeks of each other. But in this sport, stranger things have happened.

REAL MEN CARE FOR KIDS: The Big Three cannot avoid being kind to kids. Federer has four children and a foundation that tirelessly helps kids in southern Africa. When recently commenting on climate change, he said “I take the impacts and threat of climate change very seriously, particularly as my family and I arrive in Australia amidst devastation from the bushfires.” Rafa has no kids, but he has an expanding junior academy in Mallorca and his foundation seeks to educate youth in Spain and India. In New York, while signing autographs, he rescued a small child who was being crushed by the crowd. Earlier at the Aussie Open after one of his shots hit a ball girl he kissed her and comforted her, and later had coffee with her and her family. Novak Djokovic’s foundation focuses on early childhood development and preschool education, and this winter he went to the Green School in Bali. He said that in Bali, “Everything is in harmony with nature, respecting nature’s laws. Seeing kids going barefoot, playing sports, spending a lot of time outdoors: this kind of interactive play combined with learning is something more special that I have seen in the education system. They’re not grading kids. I’m all for that. You see a lot of kids smiling. They’re all very smart. It is a very creative environment.” 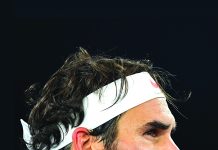