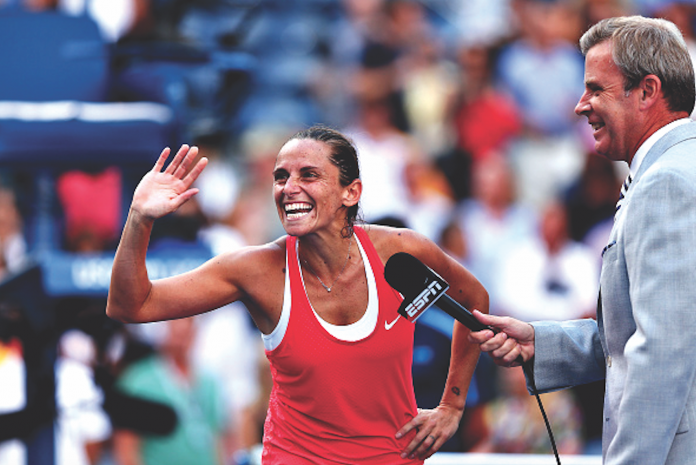 “There was an emptiness. There was a void. And in that vacuum a sphere was created. And man began to play.” – The Davis Cup Opening Ceremony

“Today I can maybe touch the sky.” – an elated Roberta Vinci after her US Open win over Serena

“When I was 17, I thought I knew everything, but I knew nothing.” – Andrea Petkovic

“Some people accuse me of never coming to the net. It’s so not true. I’m there for the coin toss and at the end of the match.” – Sofia Arvidsson

“He came to net on a Wang and a prayer.” – the BBC, on the iffy approach shots of Jimmy Wang

“No one has spent that much time on grass since Cheech and Chong.” – Seth Meyers on John Isner and Nicolas Mahut’s three-day Wimbledon marathon

“Federer never looks like he’s imposing his will…He’s playing off the music of his opponent.” – coach Steve Stefanki

“There will never be a rivalry like ours.” – Federer on Nadal

“I doubt about myself. Doubts are good in life. The people who don’t have doubts I think only two things: arrogance or not intelligence.” – Nadal

“If I think that I am better than him because I beat him 19 against 10, I will be very stupid and very arrogant.” – Rafa on his record vs. Federer

“I [have] to win a few times in order to call it a rivalry.” – Sharapova on competing with Serena, who she’d then lost to 15 straight times

“It was said [by the late Ted Tinling] that I go from arrogance to panic with nothing in between. I think Serena and I have that in common.” – Martina Navratilova

“If Federer can’t serve and volley, then it can’t be done in this day and age.” – Jim Courier

“Boxer Marvin Hagler noted if you sleep in silk pajamas, it’s tough to wake up at 6 in the morning and go for a run.” – Ernests Gulbis, whose father is one of the wealthiest men in Latvia

“It was a match without brains.” – Wawrinka after losing an Indian Wells match that had 13 breaks of serve

“This kid gives you so many looks, and anyone who’s owned a teenager knows many of them.” – Carillo on Jelena Ostapenko

“[Serena] gives us the whole range of what it is to be human, and there are those who can’t tolerate the humanity of an ordinary extraordinary person.” – Novelist Claudia Rankine

“I heard being married is tough. [You] have to stick around, be supportive, listen. It seems really hard.” – Venus

“He can be a giant killer or go off with the pixies.” – Craig Gabriel on Tomas Berdych

“I like to be in the creative spirit all the time. Everybody is moving – the people, our planet – you either keep up with it or you just stay where you are…But [if you stay] wherever you are, you actually regress.” – Djokovic

“God gave me once [a chance] to be the hero, maybe to win the Davis Cup in the deciding rubber. Now he took it away.” – Viktor Troicki

“We’re all human beings. We all need to try to live together and understand each other because we’re a little different, but in the end we’re the same.” – Timea Bacsinszky

“Being different is one of the most beautiful things in the world.” – Svetlana Kuznetsova

“It’s a doozy by Kuzy on Suzie.” – Mary Carillo on a great Kuznetsova match on Court Suzanne Lenglen at the French Open

“I cannot be without tennis.” – Russian Andrey Rublev