The dazzling wife of tournament organizer and soccer superstar Girard Piqué pranced and threw her hips. In a concert just before the Davis Cup final today, Shakira gyrated and danced. With the crowd in a delirious frenzy, she asked, “Is it true you want it?” For a while, as Spain’s team dealt with a string of obstacles, local fans just weren’t certain their men in red and gold would prevail.

Time and again this week, Madrid’s Magic Box was a helter-skelter circus. The sport seemed to be on steroids. The new staccato Davis Cup format was called blitz tennis. In packed or virtually empty arenas, make-or-break intensity became the new normal. Tears flowed, elation was common, although there was little that was common about play until four in the morning or the ear-shattering howls of the Croatians and Argentinians. Finally, common sense settled in. The trumpets and drums still sounded, but finally things began to make some sense – Spanish sense.

The Davis Cup had been taken over by a Spanish soccer superstar. Madrid was hosting what was now called the World Cup of Tennis. Spain not only had the incredibly important home-court advantage, they had experience, having played in ten Davis Cup finals. They had depth – plus a gentleman, Señor Rafa, who’d played on four Davis Cup championship teams, who won two of the four Slams this year and who is world No. 1. And, by the way, he’s a national inspiration who touches hearts. Few sportsmen are so loved in their homeland. The stomach pull he suffered a couple of weeks ago had healed. In both singles and doubles he’d put the Spanish team on his shoulders. And he hadn’t lost his serve all week.

So everything had aligned. Let the party begin.

But not so fast. Spain’s second best star, Roberto Bautista Agut, had had to leave the team due to the death of his father. Two other Spanish players had been injured. Their Canadian foes in the final were considerable. Never mind that their country has a small population and is infamous for its long, freezing winters. And there were the inconvenient facts that their best player of this era, Milos Raonic, hadn’t even come, and Felix Auger-Aliassime had needed to sit out four ties with an ankle injury. And Canada had never reached a Davis Cup final before. Calling on No. 150, Vasek Pospisil, and No.15, Denis Shapovalov, the Canadian players had downed Italy, the US, Australia and a formidable Russian team by the same narrow 2-1 scores.

In the opening match of the final, the Canadians at last called on 19-year-old Auger-Aliassime, who became the first player born in the 2000s to earn an ATP point and the youngest player to reach the top 25 since Lleyton Hewitt. Handsome, athletic and cool, he brings Arthur Ashe to mind. But even the cool Ashe wouldn’t have found it easy with twelve thousand Spaniards chanting “Olé! Olé! Olé!” in perfect harmony, and cheering his every misstep. Playing in just his third Davis Cup, and his first Davis Cup final, Felix had not played a match in close to seven weeks.

Plus, at a time when Davis Cup authorities are in a cold war with Laver Cup boss Roger Federer, it wasn’t a good omen that Felix has the same August 8th birthday as the Swiss master. More to the point, the Canadian was facing “the Spanish cowboy,” Roberto Batista Agut. He is not the GOAT, but Agut was the most sympathetic figure in the Davis Cup.

“If you have any decency you have to understand all the emotions he is going through,” said Euro Sport. Now ranked No. 9 and more of a power player than most Spaniards, the 31-year-old reached the Wimbledon semis, and this year has twice beaten Novak Djokovic.

Today, Agut used his calm, his experience and the favorable winds of the Spanish crowd. Auger-Aliassime fought with courage. But his rust, his youth and the weight of the occasion did him in. The Canadian’s forehand was as wild as an unhappy elk and he hit six double faults and 45 unforced errors before losing the opening tie that Canada just had to win.

After all, up next was the greatest Davis Cup player of our era, who had been on four championship teams, was 7-0 in close-out matches and had put the Spanish team on his capable shoulders, despite finding himself arriving at his hotel at 4:24 AM the other night: Rafa Nadal

His foe, the flashy, flowing shotmaker Denis Shapovalov, had played brilliantly all week. He was clutch as he found the lines at crunch time. But Nadal dismissed him 6-3 in 35 minutes in the first set and the two lefties had narrow opportunities to break away in the second set. Neither did. A tie-break followed with everything on the line. Shapovalov blew a rally backhand. The door was open for Rafa. The Spaniard blasted an ace to go up 6-4 with championship point. But the Canadian was steel. He blasted a forehand down the line past the hapless Spanish conqueror. The tiebreak got the set back on serve; then Nadal surged. Again Shapovalov was under pressure. Down a third championship point, the brave young Canadian netted a dicey forehand from the alley.

Rafa, as in New York and Paris, fell to the floor. His 6-3, 7-6 victory secured Spain’s seventh Davis Cup. Rafa’s teammates piled on to hug their hero, who’d taken them to a Davis Cup Championship like no other. Nadal leaped in ecstasy. Then the elated Spaniards leaped together in a circle dance of joy. This is not the first time we’ve seen such a Spanish dance. It will not be the last. Soon we saw Rafa beaming. Phillip the Fourth, the King of Spain, gave Rafa, the King of Clay and the King of Davis Cup tennis, his fifth Davis Cup Championship trophy. The bold battler who, just 20 hours earlier had said, “We had to find a way” had again found a way.

As the songs of national pride and the loud trumpets at last begin to fade, we leave this Spanish capital at a time of some Davis Cup uncertainty, while knowing one thing for certain. Today there was pure magic in the Magic Box. 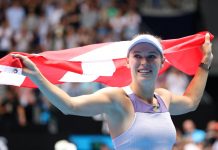