Hunter Gallaway was in shock. On Sunday, his dream, his baby, his beloved Contra Costa tennis haven – the Lafayette Tennis Club ­­– was a smoldering ruin, little more than heartbreaking ash.

Forty hours after a shock fire destroyed his hillside retreat hidden high in an upscale suburban paradise 23 miles east of San Francisco, the devastated club owner told IT, “I don’t know what to say. what else can happen to a person in this profession?”

Gallaway is a lone ranger. He owns the facility, but isn’t part of a big chain. He’s not backed by a big corporation. The slim blond is a caring dad with two aspiring kids. He’s pocketed 20 national titles, is a sought-after coach and is very much an entrepreneur. He sees and does things his own way.

When he felt the USTA NorCal unfairly restricted him from holding many of the tournaments he had traditionally hosted, he sued the powerful group. It took over five years, in and out of court, but he finally prevailed and got a huge payoff.

He then invested over a million dollars into upgrading his club. Over a year and a half, he built an entirely new gym and fitness center with a slew of high-end equipment and a climbing wall. He upgraded his pool, launched a swim school and offered everything from circuit training to boxing classes.

Then fate boxed his ears.

Workers had been dealing with a PG&E transformer just above his club, when seemingly out of nowhere, it exploded. Thunderous sounds burst for nearly five seconds. Everything within 30 to 50 feet, including trees, broke into hungry flames. Below, 50 kids were playing a tournament. Unfortunately, mean winds had been howling and there were three other fires in the area. So it took the fire department 45 minutes to get there. Gallaway arrived in ten minutes, but there was nothing he could do, “There were just a couple of cops and me watching,”  he sadly recalled. “I thought of all the memories and people. I tried to run up to the clubhouse and grab the drawings my kids had made, and other pictures, but I knew I couldn’t do anything. I just thought I’d have a shot of espresso, but my machine was gone. There was nothing but air.”

California, of course, has been ravished by fires, floods, mudslides and earthquakes. Now flames rage from Santa Rosa to LA. And Oakland’s Highlands Club, which is just over the hill ten miles away, was burned to the ground in an East Bay firestorm almost exactly 28 years ago. But it only had three courts. Lafayette is the first major Golden State tennis club we know of that has been destroyed by fire.

When the fire department finally arrived they had their troubles. They couldn’t find a hydrant and had to battle the hillside blaze from below. Eventually, a jet and two helicopters came by. But it was too late. Many of Gallaway’s personal possessions were gone. He realized he had bills to pay, but there was no checkbook.

Yes, his pool and most of his nine courts were okay. And he has insurance. But plans for a November gala to celebrate an alliance with Tompkins Tennis were now just afterthoughts. There was no TV, no gym no nothing – just his pool and, most of all, his memories. 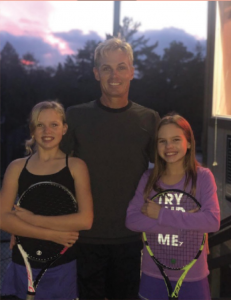 But the tennis world, and even once bitter foes, rallied to Gallaway’s side. “Luckily the community has been great,” he said. “Even people I disagreed with politically have been supportive. That people are thinking of me means so much to me. I’m going to rebuild. I have to do it for the community and the people.”

Before he rushed off to consult with a fire inspector, the 52-year-old, who looks younger than his years, admitted, “It’s hard to get it all in my head. I’m taking one day at a time.”

Tennis in America: Upbeat USTA Chief Dowse on the US Open and the Opening of the Game