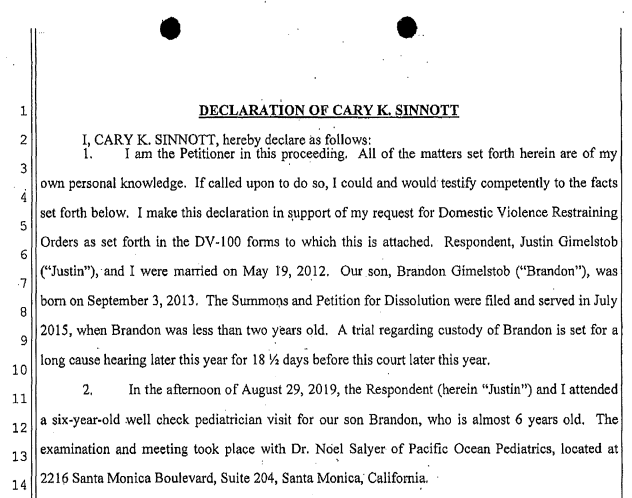 The most toxic narrative in modern American tennis history continues to astound and baffle. Last Halloween, Justin Gimelstob, the once-powerful ATP politician, broadcaster and former player, was involved in a fierce fight with his former friend Randy Kaplan. He pled no contest to a felony battery charge, which was reduced to a misdemeanor. More recently, Gimelstob’s former wife Cary Sinnott tried to get a permanent restraining order placed on him. She claimed that on August 29th, during a doctor’s appointment for their six-year-old son Brandon, Justin became “agitated and somewhat combative.”
Sinnott asserted that Justin told Brandon, “Mommy is going to jail tomorrow.” Cary began videoing and she said Justin then “came over my back and lunged on me, knocking me to my knees…[He was] grabbing at my arm and jarring my phone…He was trying to take my phone away, as he has done before. Brandon and I both began crying and screaming…I scrambled to my feet and ran with Brandon into an examination room…Justin forced his way into the room…I asked Justin to get out…Brandon and I ran from the office…Justin followed us…[We] were both shaken and Brandon continued to cry. We went home and I called the police.” Both Justin and his girlfriend Austin Ruth, who was outside the office, strongly countered this narrative and the judge refused to issue a restraining order.
In a May hearing, Kaplan and his wife read graphic victim impact statements that described a brutal, out-of-nowhere attack in which Justin punched Randy 50 times for three minutes and induced family trauma and his wife’s miscarriage. But on August 26, Gimestob presented a filing that almost completely contradicted Kaplan’s narrative. And Randy’s housekeeper and live-in nanny, Celeste Pete, sent IT a stunning whistleblower letter claiming that Kaplan had not been injured, and Randy was out to destroy Gimelstob.
Justin claimed Kaplan had long had a vendetta against him. He painted a picture of a friendship of two wealthy men that had gone terribly wrong. Kaplan reportedly liked celebrities, women and parties. Gimelstob felt Kaplan was using him to boost his social status and gain access to women. And when Justin drew back Randy felt betrayed.
Gimelstob referred to a number of troubling incidents including times when women reportedly threw drinks in Randy’s face. Justin’s lawyers noted that when Randall “ran into Mr. Gimelstob in a local restaurant, [he] stuck his finger in Mr. Gimelstob’s face and threatened, ‘I’m going to put you in jail for the rest of your life.’” Justin claimed that Kaplan became “increasingly paranoid” and “began ranting” about Gimelstob’s withdrawal from their friendship. He claimed that on Halloween, Kaplan had taunted him, saying, “I heard your dad just dropped dead, and he was an even bigger asshole than you.”
Minutes later, Gimelstob confronted Randy, and according to Justin’s girlfriend, “[Kaplan] turned and said ‘Fu** you’ before pushing Mr. Gimelstob’s chest…Mr. Gimelstob then tackled Mr. Kaplan, and they proceeded to wrestle…for approximately twenty to thirty seconds,” – not the three minutes that Randy stated. Justin also disputed Kaplan’s wife’s claim that she suffered a miscarriage as a consequence of the fight.
Celeste Pete asserted she heard Kaplan make a disparaging Thanksgiving toast in which he boasted he’d finally gotten back at Justin. For months, said Pete, “Kaplan spoke incessantly about Mr. Gimelstob.” She claimed Kaplan had exhibited “no physical injuries.”
She wrote, “I finally am able to speak openly…I was stunned when I read words like ‘brutally’ attacked…But I understand why…[people] believe a man like Randy…He’s smooth. He bamboozled me…I informally overheard a lot of the conversations…[like] Randy gloating to his associates/kids/wife/ex-wife Lara…[or] how he contacted… news organizations. His intentions were…to destroy Mr. Gimelstob… [Randy’s] description of the pain and suffering he experienced were all lies. I do his laundry. Don’t you think I would have noticed a ‘little’ blood on a towel? …I never saw a single medical supply out, not a single Band-Aid…[His] actions were so manic that everyone in the house became concerned…his children became very agitated.”
Justin referred to different instances and said, “Kaplan has a proven track record of inciting violence.” Pete claimed that Randy “tried to silence me as soon as he suspected I had overheard conversations…It was not uncommon for me to hear Randy say things…[like] ‘Can I count on you to back me up on this story?’ He was constantly…contacting people who could give him dirt on Justin.” Pete claimed that Kaplan forced her to sign a non-disclosure agreement that she said Randall himself wrote.
Kaplan’s lawyers strongly dismissed the veracity of Pete’s comments and said they came from a “Twilight Zone.” The lawyers asked what many had wondered: “Why did Mr. Gimelstob not contest the felony assault charges…[The judge] inquired of Mr. Gimelstob: ‘Do you understand that I will treat a no contest plea the same as guilty…Do you understand that?’  Mr. Gimelstob responded, ‘Yes, sir – Your Honor.’” IT reached out to Justin, but he did not respond. The Gimelstob-Sinnott divorce case, that could be explosive, will be heard in November.