We divide our year into twelve months. The Bible has its twelve apostles. Astrologers insist our fate is based on the twelve signs of the zodiac. As for Hollywood, they gave us the Dirty Dozen. And when it comes to tennis, today the world’s foremost dirtmeister, Señor Rafa Nadal, got his dozen: a record twelfth French Open title.

His 6-3, 5-7, 6-1, 6-1 win started out as a tight, fierce battle. He and No. 4 Dominic Thiem, who is said to be the second greatest clay player in the game, unleashed an array of breathtaking winners. Broadcaster Gigi Salmon gushed, “This is the final we wanted. It’s the aggression, the ferocity, the heat. It’s everything.”

Today the Austrian prince, who left his own press conference for the Queen of Tennis, hoped not to be booted off the court by the King of Clay. Thiem hit early, he defended, and he ran like a deer. He matched Rafa’s physicality. His one-handed backhand offered beauty and power. His forehand had depth. After 25 minutes he blasted an overhead to secure a statement break of serve and go up 3-2.

But against Rafa, there’s little time to breathe – and less time to celebrate.

Rafa is King, the alpha male. Stade Roland Garros is his turf. As usual, he unleashed his haymaker forehands. His message was clear: “Don’t get your hopes up, buddy. This ain’t happening.” He put his foot down and his forehands down the line. In a dispiriting flash, what had been a tight set soon was in Nadal’s pocket, 6-3. Thiem reportedly muttered, “It takes 90 hours to play a point. It’s pointless and annoying.”

Still, Dominic had reason for hope. He’d been in last year’s final. He’d won Indian Wells and Barcelona, and, incredibly, he’d beaten Nadal four times on clay. Thiem maintained his aggression, managed to hit more winners, and then, deep into the second set, scored a stunning break to even the match at a set apiece.

Nadal, a savvy veteran who plays tennis on his terms, then went off court for seven minutes and plotted. Thiem, who yesterday was in tennis heaven when he downed No. 1 Novak Djokovic, promptly descended into tennis hell. He confided that in the third set, “I had a little drop. He came out like a rocket – full power.”

Nadal won 16 of 17 points and raced to a 4-0 lead. Thiem must have felt like Stefanos Tsitsipas did at the Australian Open when Nadal pummeled him. The Greek confessed, “I felt kind of empty in my brain…He makes you play bad.” The kid got that right.

Thiem reported that Rafa stepped on him. Still, in the fourth set, Dominic had his chances. He managed four hard-earned break points, but faltered. Sports is about playing big in the big moments – and Thiem didn’t. The 25-year-old has never won a Slam. Like the ATP’s lost generation – think Nishikori, Dimitrov, Raonic – Thiem couldn’t dethrone his elder. Rafa, Roger and Novak have won the last 9 Slams and 49 of the last 57. Of course, there’s zero shame in falling to Rafa.

Nadal’s forehand is a weapon that continues to amaze. It has it all – speed, spin, placement, weight. We know it well – still, it surprises. Down the line to an open court, flicking winners out of nowhere or punishing susceptible backhands, his forehand is a jab, an uppercut and a knockout punch like no other. Plus, his backhand is a laser. He’s the bull, but his uncanny anticipation is cat-like. He pounces, he sticks his volleys. And his don’t-tread-on-me defense withers foes. But it is this man’s fury and unblinking intent that is his essence.

Perhaps it brings to mind Lleyton Hewitt, but without the “C’mons.” Perhaps you envision Jimmy Connors, but with imposing topspin. Federer said it best: there’s only one Rafa.

Rafa is a gentleman – his humility is touching. Sometimes his expression is dreamy. But there’s one thing that defines this man – will. Standing in triumph on Court Philippe Chatrier after yet another mind-boggling triumph, his back was coated with his beloved clay, his hands lifted to the Parisian heavens, here was one of the great sporting warriors of all time.

When it comes to fierce desire combined with sublime skill, Rafa is in the same conversation with Michael Jordan, Bill Russell, Tiger Woods, Ty Cobb, Pete Rose and Wayne Gretsky. But why?

His Uncle Toni explained, “Rafa used to worked like this when he was young: every practice was like a final. [He] cannot understand life without this commitment…[It] is the most important thing in life…The effect is important. When you see someone who wants to hit every ball hard, then the opponents know. His father would tell him, ‘You have not to go for this ball because you cannot arrive,’ and I said, ‘No, no, no – it is better to go.’”

When IT asked Toni where all that will came from, he reflected: “I don’t know. [It] is natural, because the inspiration has to be in the work. It’s the same for a painter, a sportsman, a journalist – for everyone.”

Despite missing 15 Slams due to injuries, Rafa has won 18 majors, and, for the first time in his career, he’s just two behind Roger. Uncle Toni said Rafa can win Wimbledon. After all, “Inspiration is a wonder.” But Rafa insists it’s not on his mind, “You can’t be frustrated…because the neighbor has a bigger house or a bigger TV or better garden. That’s not the way that I see life.”

What observers saw today was an athletic genius who again touched our imagination. Joel Drucker wrote: “As they surely will, space invaders will arrive on Earth to claim our planet. But first, their designated tennis player must try and beat Nadal at Roland Garros. If the invader wins, I will board the ship.”

Mary Carillo asked the question that all of the ATP may have been considering: “Is Rafa going to have to retire before someone else wins this?” 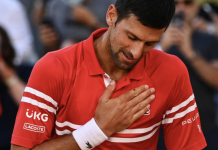 Novak Djokovic – The Greatest Man to Ever Pick Up a Tennis Racket? 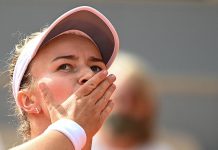 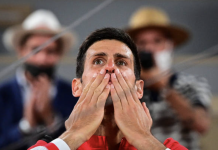 Rough Seas, But The Good Ship Djokovic Sails On at Roland...

The Day The Mighty Serena Struck Out

Getting In Touch with Novak’s Inner Child: The Roland Garros Buzz