Today there was somber, yet good news. After growing public scrutiny the beleaguered Justin Gimelstob at last resigned from the ATP Board and from the Tennis Channel. Now tennis will be spared a toxic battle to see if Justin will be reelected in the upcoming May 14th board election.

Gimelstob offered a public statement to the ATP which was filled with some remorseful and even poignant reflections. But his lack of understanding, accountability and contrition was striking. We sincerely hope he can dig deep and eventually “get it” and redeem himself. For now, he seems far from grasping a simple, core truth: physical violence, verbal abuse, rage and toxic masculinity are not acceptable. And, instead of spending so much time and money on high-powered attorneys he should dig deep and spend time working on himself.

His statement euphemistically references “his choices and actions last Halloween.” However, he continues to deny his victim’s statement that Justin blindsided him, pounded him for three minutes with at least 50 concussion-inducing blows in front of his wife, his two-year-old and other kids. In today’s statement he speaks of his love of his five-year-old son. But there’s no mention that the brawl reportedly occurred while Kaplan was pushing a stroller, that there were other kids present and that the family trauma of the beating allegedly caused the miscarriage of Kaplan’s baby.

Justin says his ATP resignation is because he’s “become a significant burden and distraction” for players and tennis and that, “given the current climate I do not deserve to be in this position.” Yes, that’s part of it. But the real reason he should resign is that he unleashed a brutal attack – period.

Justin says, “People in positions of power must be held to the highest standard of conduct.” Sure, but all people should be held to high standards. Justin stated, “I have always taken responsibility for my role in the events.” But from the time he referred to WTA players as “beached whales,” to the time he said he wanted his brother “to nail” Anna Kournikova, to issues relating to the attacks on different men, his relationship with his former wife and with Kaplan himself, Justin has continually provided, at best, nuanced explanations. rather than simple, aware and heartfelt apologies demonstrating full accountability. Worse yet, he often has counter-attacked his alleged victims with abusive, profanity-laden comments and/or legal initiatives.

Justin proclaimed, “I can, have, and will continue to dispute the way that evening has been depicted.” But Judge Upinder Kalra asked Justin, “Do you understand that I will treat a no contest plea the same as guilty?” Gimelstob responded, “Yes, Your Honor.” His lawyer, Shawn Holley, stated, “Mr. Gimelstob remains prepared to plead no contest, recognizing that this court will find him guilty based upon that plea.”

But a week later Holley sent a letter to the ATP Board. Entitled “There Has Been No Finding or Determination That Mr. Gimelstob Committed Any Crime,” it said Justin “does not plead guilty or otherwise acknowledge guilt.” But the judge stated, “After a plea is entered, if a person goes on the courtroom steps and denies responsibility, the court can bring the person right back in and set aside that plea.”

Gimelstob’s statement says, “I am deeply saddened and remorseful that my actions have caused the sport, players, my colleagues, friends and family such a distraction.” Yes, this has been a demoralizing time for the sport. But there is nothing on Justin’s devastating impact on the Kaplans. Justin says he wants to “be judged by my complete body of work.” But this deflects. This is not the point at hand. He correctly notes that we can learn from failure, that it should be embraced and there is value in “failing forward.”

He also speaks of “the pain of losing my father and the ongoing litigation for equal custody of the most important thing in my life, my son.” Again this is self-enabling and obscures the point. If Justin, shortly after his attack, had just said, “I am so, so sorry for what I did to Kaplan and his family,” and added that he would do everything he could to stop his violent ways, things would probably have been far different. People are compassionate. But for over six months, at every turn he resisted and battled.

In court the judge stated, “This was an unprovoked attack.” Still, the letter Justin’s lawyer sent to the ATP on April 30th (which had many PR spins) asserts, “the Court did not make a determination that Mr. Gimelstob provoked the incident or that it was unprovoked.”

Justin told the New York Times that he flew to Spain Tuesday because he “wanted to look Novak [Djokovic] in the eye,” and thank him and apologize. But sources indicated that he went there to engage in his effort to gain reelection to the Board.

As the tide shifted against Justin, reports indicated that a popular, well-respected female Tennis Channel broadcaster had threatened to quit if Justin was put back on air. Also on Tuesday, Stan Wawrinka joined other critics like Andy Murray, Darren Cahill, Amelie Mauresmo and Martina Navratilova and said, “Players need to speak out. Gimelstob has been convicted of a violent assault. It simply cannot be possible for anyone to condone this type of behavior and worse, support it. In any other business or sport we would not be discussing this. The ATP council needs to …finally end this conversation and shameful period in our great sport.”

British commentator Catherine Whitaker said it would have been “utterly ludicrous” if Gimelstob’s pupil John Isner did not recuse himself from voting on May 14th. Then she put the matter in a powerful, provocative context. She noted that Justin has “been the single biggest mastermind of a thoroughly rotten and toxic setup or atmosphere in the governance in the sport. There is almost an element of Stockholm Syndrome [when hostages develop a psychological alliance with their captors], he’s got all these people hoodwinked. He’s sort of their abuser yet they all think “we need him” but you only need him within the parameters that he has set. Remove him and you can reset the parameters. You, therefore, don’t need him anymore…Men’s tennis has a bit of a stench of toxic masculinity about it…Charlie Eccleshare wrote about the lack of male players that have come out as gay…that the equal prize money debate is raging again in 2019. There is a stench of toxic masculinity and Gimelstob is a beacon of that. An absolute beacon, and a beacon with an extraordinary amount of power. That situation is unreal.”

But the tide has shifted. In just a day Justin has finally lost his two prime positions of power. Now let’s hope he really works as hard at understanding his deeply problematic issues as he has worked on rising in the game and demolishing his foes. 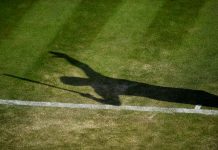 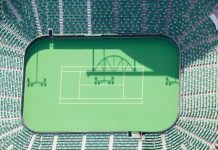 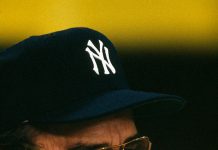