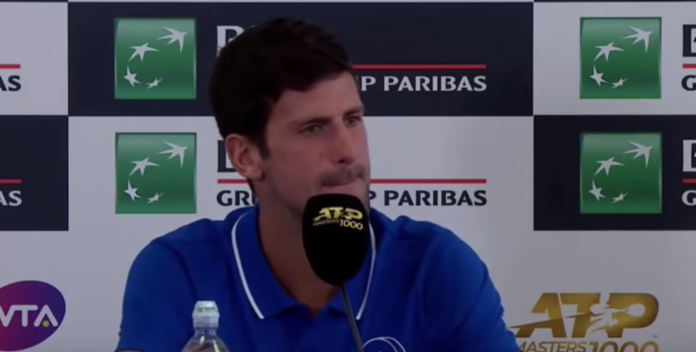 In just six months, the ATP has done the following.

In Indian Wells, just after Kermode was fired, Djokovic said the Player Council was elected to make decisions. Still, he was criticized for not seeking out the opinions of the two most important figures in the men’s game – Federer and Nadal. Rafa said the dismissal of Kermode would “stop the process of improving the sport.” Djokovic sidestepped many questions and never really explain why Kermode was fired, saying confidentiality prevented him from clarifying. Others asked, “Why not be open and just tell us why?” Novak added that the ATP’s structure is “a bit flawed…[and], that’s something…we have to address…It’s time to really make some changes.”

In Rome today, in a tense, dramatic nine-minute exchange with New York Times writer Ben Rothenberg, Djokovic, who just won the Madrid title, was emphatic, tense and defensive as he claimed that everyone was blaming him for everything. He asserted that if people understood the ATP’s structure, this wouldn’t be happening.

Here is a slightly condensed version of the Novak-Rothenberg exchange:

You’re going from here to the player-council meeting, what do qualities do you look for in a candidate.

First of all, the way it was presented in the media I didn’t really like it and I don’t think it’s fair you guys point out myself as the decision maker.

I am the president of the Council but it consists of ten players, so majority decides. I’m one of ten…I’m very privileged to be leading the group but I cannot make decisions on behalf of the group…

If you don’t think you should be accountable as president, who should be?

It’s not about accountability, it’s about the way you guys are portraying the whole process. Kind of putting all the weight on one guy…We have representatives on the board so I am not the one…voting yes or no…It’s three board representatives, so they have the right and historically they have been doing something against the council because they feel responsibility and they feel that’s the right way to…represent players in the sport. We have been selected…to be representatives…but we cannot always influence…voting the way they think they should. Why should I always be the one accountable for that if I’m not the one voting?

If the board members that vote against your wishes then get ousted like Roger Rasheed, it seems like you have an influence.

It’s happened in the past where they have stayed.

And it does seem, from what I’ve heard, you are voting in the majority consistently, it’s not like you’re getting overshadowed. You are the leader by title in this group, and the No. 1.

And your sources are reliable?

Sure, if you ever want to say anything on what happened, you can shed more transparency on it

You have first-hand information from the Council?

If you wanted to refute something – great. But if you just want to say, “You’re not saying the right thing” and give no counter story, that’s not as useful.

I know you guys are looking for a story and when you have a certain agenda behind certain stories and articles that are written, you cannot always react and act from the position of defense because then you would expose…your weakness. What does that mean? That we have to react to every article that you or anybody writes, because you’re exposing [the] Council, exposing me as an individual that I am against certain individuals…I just don’t understand your comment that we have to react with the opposing story on every single article. It doesn’t make sense.

I’m not asking for that.

But that’s what you said, you said if there is a certain story in the media you want a counter story.

For me, it’s not fair. If you want to write the whole story and understand both sides you would get a little bit more information rather than calling out [the] Council or myself…

When I try to get information from you, you don’t give it so I don’t know what you want me to do.

I am not the president of ATP…I understand you want to get information from me. Some information I can give you, some I cannot, I am not in the privileged [position] to give you. Or, I can, but then it’s not fair towards the president of the ATP or board members who are also supposed to communicate…I’ve been exposed way too much…Everyone holds me accountable for every single thing that happens in tennis at the moment, which I think is unfair, because I am not the only one there…I just feel [in] the way we go about things there is a lack of respect. Just pointing out one guy and putting all the pressure on him, nothing against you personally, but I think the process could be handled differently.