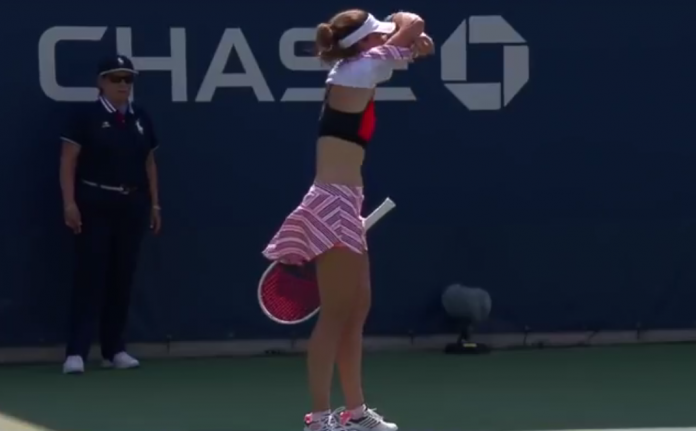 You see Andy Murray, shirtless, walking around the court and you know that that Scottish guy with the pale complexion is looking good – very buff. And when Rafa Nadal changes his shirt mid-match the throng goes absolutely bonkers. It’s something to tell the neighbors about – “I saw Rafa shirtless.” When Novak Djokovic takes his shirt off on a changeover so his ice towel can have a greater effect – you hardly notice. No big deal.

But Lordy, when Alize Cornet removed her shirt by the baseline, the globe nearly slipped off its axle. Never mind that Cornet is from the same country, France, whose tennis boss just said Serena wasn’t respectful of Roland Garros because she wore a body suit. Instead, we speak of Cornet, who realized she had her shirt on backwards and, knowing full well that she was wearing a proper sports bra (just like the still-famous soccer star Brandi Chastain), promptly took her top off so it would be on properly and she would be comfortable.

Then, wouldn’t you know it, in this era in which rules and officials hover over tennis like an unsparing schoolmaster, the ump gave her a code violation warning. Cornet was upset for ten seconds, but calmed down and promptly lost the match. She said the ruling was very unfair, but the ump was young, simply made a mistake and “was overwhelmed by the situation.” The USTA made a much-appreciated apology.

Cornet said, “For sure the women are treated a little bit differently [than the men].” She added, “I think it gets much better [for women] especially in the tennis…As WTA players, we are very lucky, because we have a lot of equity in this sport.”

Still, she was surprised by all the commotion. “When I woke up this morning, I didn’t think that this would become so famous in less than 24 hours – it was pretty weird…What Bernard Giudicelli said about Serena’s catsuit was 10,000 times worse than what happened to me…because he’s the president of [the] French Federation and because he doesn’t have to do that.” She stated the obvious, saying that Giudicelli lives in a different time.  “When I came into the locker room [this morning], many came to me. Even former players, like Tracy Austin – I was very honored to actually be approached by her. They were just giving me all their support…All the players were telling me that if I get fined, we would all be together and see the WTA, and make a revolution…I was, like, ‘Calm down. I’m going to get the information first, and then we see if we make a revolution or not.’”

Over the years there has been a revolution of sorts in the history of the humble tennis shirt, which was created by seven-time Slam champ Rene Lacoste, who wore the polo shirt he first invented and then debuted at the 1927 US Nationals. He soon put his famous crocodile logo on the shirt. 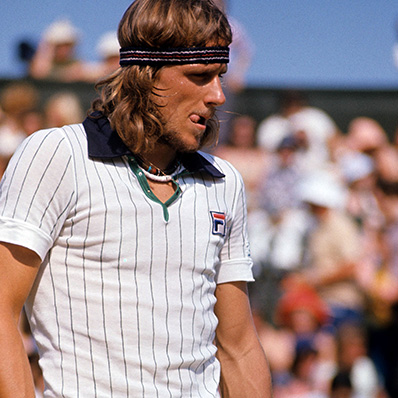 Decades later, Jack Kramer found himself meeting the King of England in a white T-Shirt. Colored shirts didn’t enter the game until 1970, and Ilie Nastase was the first player to win the US Open in a colored shirt. Bjorn Borg’s iconic Fila shirt had such an impact that it’s now in the Hall of Fame. At Wimbledon in 1988, ball girls used towels to create a makeshift curtain to surround American Barbara Potter as she changed her shirt on court.

But no other player, not even Serena, has given us more feisty T-shirts than Sania Mirza. The Indian’s messages included “Attitude Unlimited,” “Well-Behaved Women Rarely Make History,” “You Can Either Agree With Me Or Be Wrong,” and “I’m Cute, No S—t.” Mirza commented, “I must say, I’m kind of impressed with myself.”

Sometimes players use shirts to announce their mindsets. The message on an Andy Murray shirt proclaimed, “Prepare, Defeat, Destroy,” while Maria Sharapova reminded herself, “Leave Fear Behind.” While some loathe sleeveless shirts, Jon Wertheim proclaimed, “Only the most taste-deprived, knuckle-dragging troglodytes don’t know that sleeveless shirts are the height of fashion. Get with the program; well-ventilated armpits are in!”

Over time, shirts have been a motivator. Slovakian Dominik Hrbaty was infamous for wearing a pink-on-black, see-through, full-of-holes peekaboo shirt that some deemed the ugliest tennis shirt ever. After Lleyton Hewitt beat Hrbaty, the Aussie confided, “I just couldn’t lose to a bloke wearing a shirt like that.”

Shirts have been part of the fabric of tennis analysis. During a Davis Cup final, Christopher Clarey noted that Nadal “wears his emotions on his sleeve, which would have been an appropriate metaphor if he had not worn a sleeveless shirt.” S.L. Price offered a Rafa-Roger comparison, noting, “Federer’s game is all about elegance and flow; Nadal disrupts…[the game] while oozing testosterone, flexing his biceps in a sleeveless shirt, that only seals the image of a man’s man, Marlon Brando to Federer’s Fred Astaire.” A decade ago, when Roger was slumping, Johnette Howard suggested that “Federer’s ‘08 conquerors now number so many, they almost deserve a T-shirt of their own. Maybe, ‘Honk If You’ve Beaten Roger, Too.’”

Sometimes tennis writers are way off base. In 1992 the Miami Herald’s Edwin Pope wrote, “If Agassi ever wins Wimbledon, I’ll eat my T-shirt. Not only has he no chance to win, but if he doesn’t pull himself together soon he could be all the way out of tennis in two or three years.” A week later, when Agassi won Wimbledon, Pope asked: “Will somebody please tell me how to eat a T-shirt? Broil it? Bake it? Fricassee it?”

Tennis shirts have led to both comedy and crime. John McEnroe and Agassi looked rather silly when they were playing doubles together in oddly-shaded lime shirts in San Francisco in 1991. Steffi Graf appeared in a bikini in Sports Illustrated’s swimsuit issue at a time when she was dealing with issues with Germany’s IRS. The San Francisco Chronicle reported: “Those tax guys took more than the shirt off her back.” Spain’s Fernando Vicente confessed he stole Agassi’s T-shirts from locker rooms when he was a teen.

T-shirts have been used by writers to compare tennis’ refined fans with ruffian followers of other sports such as soccer. Sue Mott observed, “The Wimbledon crowd, unswervingly toff-to-middle class, provides a temporary antidote to those who imagine that the English, en masse [and soccer fans in particular] must revert to ripping off their shirts, revealing vulgar tattoos, brimful beer guts and violent streaks that terrorize the world.”

Shirts reveal the intensity of the game. As the gritty Mardy Fish clinched a Davis Cup tie in Columbia, his shirt bore splotches of blood. Goran Ivanisevic, Novak Djokovic and the now obscure Andrew Ilie are famous for ripping their shirts off after victories. Ilie explained his signature gesture: “I don’t mean to rub it in anyone’s face, but I get so pumped up…it’s almost as if I’ve shed a layer of skin.” And a couple of days after Andy Murray’s partner Kim Sears let ‘er rip with some expletive-laden rants against Tomas Berdych’s Aussie Open support box, she appeared with a shirt reading, “Parental Advisory – Explicit Content.”

Shirts lead to questions and changing allegiances. After Roddick wore a shirt with a much-maligned pattern of a subway map, a reporter asked if there were any subways in Andy’s hometown of Austin. Roddick noted, “The only subways they have in Austin are sandwich shops.” Vika Azarenka said she would root for Nadal in a US Open final because he was “practicing with his shirt off.” In contrast, Coco Vandeweghe said she wanted to stop practicing with her coach Jan-Michael Gambill because she got tired of seeing him play shirtless.

Shirts often proclaim national pride or bring cultures together. One New Yorker roamed around the French Open with a shirt saying, “Brooklyn Parle Francais.” Serbian Djokovic and Croatian Ivan Ljubicic, whose countries were at war during their boyhoods, took off their shirts and exchanged them after a match in Monte Carlo.

And, finally, there’s the little matter of the Bryan brothers and why, over the years, they didn’t simply wear shirts that read “I’m Bob” or “I’m Mike.”

But obviously, the ways of shirts in our sport – whether on or off, offering pointed messages, or sweaty and bloody – are odd, and far beyond our grasp.