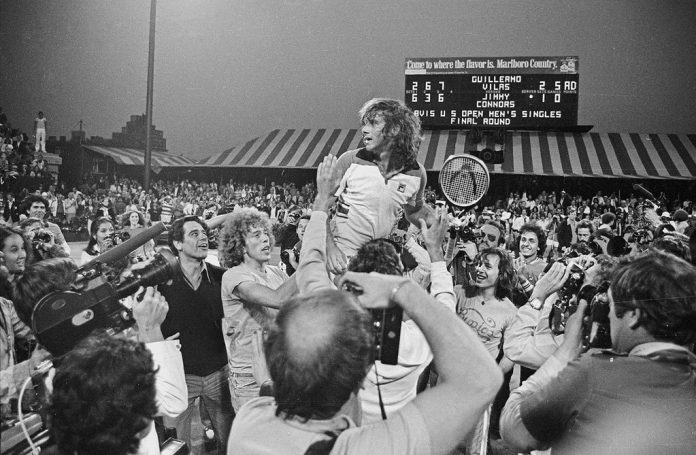 AURA-VILLE: Lloyd Carroll contended that “the aura of Federer is hovering over the Open.” Long before Donald Trump became president, S.L. Scott noticed him peering down from his suite and claimed it was impossible “to resist his playboy aura.” He added, “it looked like he owned the US Open.”

A METAPHYSICAL DIALOG: Injury-plagued Todd Martin was asked, “Where are you, physically?” He responded, “Physically, I’m right here. Would you like to know where I am metaphysically?”

AND YOU THOUGHT THE OPEN WAS RAUCOUS: Reflecting on the refined ambiance of the USTA President’s Suite entrance to the Open, Brian Phillips noted, “There was no crowd, only comfortable benches and greenery and a live harpist, playing soothing Roman-senators-at-the-baths music for the big shots and their entourages.”

TRAFFIC REPORT: McEnroe, who grew up about as close to Flushing Meadows as any other pro, found himself and Peter Fleming stuck in a traffic jam. He was defaulted out of the doubles tourney and then, after he raged, was fined $3,000.

A COMEBACK FOR THE AGES: Barbie Bramblett was down as far as you can be. But she came back from 6-0, 5-0, 40-Love to beat Ann Hulbert.

CHANGING OF THE GUARD: In ’90, a lanky Californian,19-year-old Sampras, snapped Ivan Lendl’s streak of eight straight Open finals in the quarters, and then beat Mac and Agassi to become the youngest man to win the Open.

MESSIEST MOMENTS: In a dramatic tiebreak in the ’96 quarters, Sampras used his “ill-power” after he upchucked on court to beat Alex Corretja.

GOODBYE FOREST HILLS, HELLO FLUSHING MEADOWS: The late comedian Alan King said Forest Hills, which hosted the Open until ‘77, was a private club where he never felt comfortable. Still, he said, “It had a great atmosphere. While its lush lawns fit snugly into the amateur era, pro tennis demanded a Big Top. Forest Hills was just too small.” He joked, “People who lived nearby used to pay their mortgages by charging people to park in their driveways.” Former player Louise Brough complained that when you played on one horrible court, you heard “the clatter of dishes and loud conversations from slightly tipsy patrons who were louder than the linespersons.”

OUR FAVE RFK STADIUM TALE: Cliff Drysdale took a little nap under the Forest Hills stadium, only to be awakened by a politician who wanted to meet him – Bobby Kennedy.

DIVORCE, US OPEN STYLE: A New York divorce case focused on who would control the couple’s six-seat box at the Open. The husband won.

MONEY AND MARKETING: Writer Lisa Dillman contended, “The Open seems like one big marketing opportunity interrupted by a tennis match once in a while.” Andy Roddick was No. 3 in the world in ‘05, so American Express built a $7 million ad campaign around the eternal question, “Have you seen Andy’s mojo?” But Andy lost his mojo in the first round, suffering a shock upset…In the middle of Agassi’s relentless “Image is Everything” campaign for the Canon Company, his high-profile girlfriend Brooke Shields clicked away courtside with a Minolta…When asked what it was about him that his girlfriend Delaina Mulcahy found attractive, Sampras joked, “After I won, she saw me holding the check and said, ‘I’m going to get me some of that.’”

DR. RODDICK IS IN: In ‘08, Andy Roddick was asked about the many maladies Djokovic said he was suffering. He replied: “Back and hip. Cramp. Bird flu. Anthrax. SARS. Common cough and cold. He’s either quick to call a trainer, or he’s the most courageous guy of all time.”

AN UNCOMMON ‘CONDOM-NATION’: At a tennis business conference in NYC, Tennis Channel founder Steve Bellamy complained, “This is like an insurance seminar. It’s dead in here. It feels like there is a 40-story condom on this building.”

LETHAL AND NOT-SO-LETHAL LEFTIES: From ‘74 to ‘84, southpaws Manuel Orantes, Guillermo Vilas, Connors and McEnroe won 11 titles in a row, while Navratilova in ’83 was the first lefty woman to win since Evelyn Sears in 1907.

MARTINA POP QUIZ: What’s most cool? In ’75, amid cloak-and-dagger Cold War drama, Navratilova bravely defected from Czechoslovokia. In ‘81 she double-faulted on match point to lose to Austin – still, appreciative fans showered her with applause. Martina broke down in tears. After ten years of coming up short, Martina finally prevailed in ’87, winning the first Open triple (singles, doubles and mixed titles) since Margaret Court in ‘70. At 49, she won the mixed doubles title with Bob Bryan. She holds the record for most Open titles in the Open Era – 16.

HISTORIC SWITCH: Dr. Richard Raskind changed gender in ’75, and in ’79, amid controversy, courageously played as Renée Richards, reaching the third round.

THE LUCKIEST MAN IN OPEN HISTORY: In ’98, after deciding at the last minute not to take what proved to be a fatal Swiss Air flight, Marc Rosset said, “I feel a little lucky.”

ERRANT SHOTS: James Blake missed a forehand to the open court that cost him his classic ’05 match against Agassi. And all Derrick Rostagno had to do was put away a standard volley at match point to upset Becker early in the ’89 Open. But Becker’s ball tipped the net and skipped over Rostagno’s racket, allowing Boris to come back to win the match and eventually the title.

MAYBE PRESSURE IS NOT A PRIVILEGE: In ‘87, Mats Wilander said, “In the future, if there is too much pressure, too much publicity, maybe I won’t want to be No. 1.”

YOU CANNOT BE SERIOUS: When asked why he held a 2-1 career record over McEnroe, No. 130 Trey Waltke answered, “I’m just a better player.”

NO DOUBT ABOUT IT: After her ’90 win over Graf, Gabriela Sabatini said, “I didn’t have any doubts, but I wasn’t sure I was going to win.”

MOST SACK-RELIGIOUS ANALYSIS: When asked how winning the Open changed him, Pat Rafter said, “I’m the same old sack of crap.”

IN PURSUIT OF INVISIBILITY: Graf wanted to be invisible while she watched her new love, Andre Agassi, play the ‘99 final. So she tried to hide in a seat up in Row U of the upper tier. It didn’t work.

TO EACH HIS OWN: Although the Daily Mail’s Neil Harman said Mats Wilander’s win over Lendl in the ’88 final was the most exciting semi of the year, Sports Illustrated called it “a tour de tedium.”

DOMINANCE: Beginning in ’04, Federer won five times in a row.

LOVE FOR THE KING: Every year, Billie Jean King still gets adoring rounds of applause.

FAKE NEWS FEELINGS: Reflecting on the reactions of reporters at the end of Agassi’s farewell press conference, Bill Dwyre wrote, “The response, from a group that is paid to be adversarial, probing, sarcastic, disbelieving, jaded, confrontational and objective – always objective – was a standing ovation and many moist eyes.”

MOST CREATIVE SHOT: A Mark Woodforde volley got stuck in the triangular throat of Christo Van Rensburg’s racket. Van Rensburg then dropped the racket, with the ball still lodged in it, over the net.

FOND AND NOT-SO-FOND FAREWELLS: After falling to archrival McEnroe in ‘81, 25-year-old Bjorn Borg skipped out on his press conference and soon retired. After losing to Zina Garrison in ‘89, Chris Evert poignantly waved goodbye. In ’12, Andy Roddick lost to del Potro and then announced his retirement.

QUOTEBOOK:
• “The loudest sound I’ve ever heard is the sound of 23,000 people not making a noise.” – Andre Agassi
• “A sane tennis player at the Open? You might as well try to find a Stealth Bomber-knocking general at the Pentagon or a stripper at a Methodist church picnic.” – Bud Collins