The NCAA tennis championships began in 1883 on the courts of a Hartford insane asylum. And college tennis has changed so drastically that it’s insane to try to come up with an all-time collegiate top 10. Then again, insanity has never stopped us before. For starters here are our top ten men’s teams.

Can you imagine Federer and Nadal on the same college team? George Toley’s ’62-’64 USC teams weren’t exactly that. Still, the team’s best singles players – roommates Dennis Ralston and Rafael Osuna – played each other in the US Nationals for three straight years and together won the ’60 Wimbledon doubles crown. Ralston was the best American player of the early ‘60s and led the US to ‘63 Davis Cup glory. A Wimbledon finalist while at USC, he was ranked as high as No. 3 in the world and was the only player to win NCAA singles and doubles titles back to back. Osuna was recruited to USC out of obscurity and remains the best Mexican player ever. He led his nation to its only Davis Cup final. While still at USC, he managed to win three doubles Grand Slams and reach two other Slam finals. And he won the singles at the ’63 US Nationals at Forest Hills. The second-best Rafael in tennis history was ranked No. 1 in the world, but was only No. 2 at USC.

And as fabulous as USC’s singles lineup was, their doubles teams – with Bill Bond, Tom Edlefson and Ramsey Earnhart – were even stronger. Ralston and Osuna struggled to win the NCAA doubles in five sets. The team they beat – Earnhart and Bond – were also Trojans. Toley said he could “put together a third team that would win this thing 50 percent of the time.” In one match they beat UCLA, with Arthur Ashe and Charlie Pasarell, 9-0. Writer Frank Deford suggested Toley’s “fellow coaches might well consider scheduling a separate tournament of their own at that asylum in Hartford.”

John McEnroe was perhaps the sweetest recruiting plum in college history. He’d just won the French Open mixed doubles with Mary Carillo, reached the Wimbledon semis, and dazzled during the summer of ’77. Not surprisingly, Stanford’s Dick Gould, who was said to reload rather than recruit, managed to get him to drop by “the Farm” for one historic season. Gould gave him space, and still says Mac was one of the most supportive team players he’s ever had. Others claim that John – who’s often said to be the seventh-best player ever – was the most talented college player of all time.

Not surprisingly, the ’78 team had some feisty moments. Mac and Bill Maze were the best doubles team in the country. But they faced off in a dicey semi against each other in the NCAA championships and then had to play doubles together. They promptly lost, but the team went 24-0 and won the national championship, and Mac won the singles. Their loaded roster also included ’77 collegiate champ Matt Mitchell. Their No. 5 player Peter Rennert would reach No. 37 in the world.

Three collegians with St. Louis connections made their mark on college tennis – Chuck McKinley, Arthur Ashe and a feisty fellow named Jimmy Connors. Amazingly, at UCLA, Jimbo often played No. 3 behind Jeff Borowiak, who would become No. 20 in the world, and Pakistani Haroon Rahim. The deep team included Jeff Austin, two Argentinian Davis Cup players, two Kreisses – Mike and Bob – and two Cornells – Ron and Steve. The team won two titles, in ’70 (sans Jimbo) and in ’71. Connors won the singles in ’71. 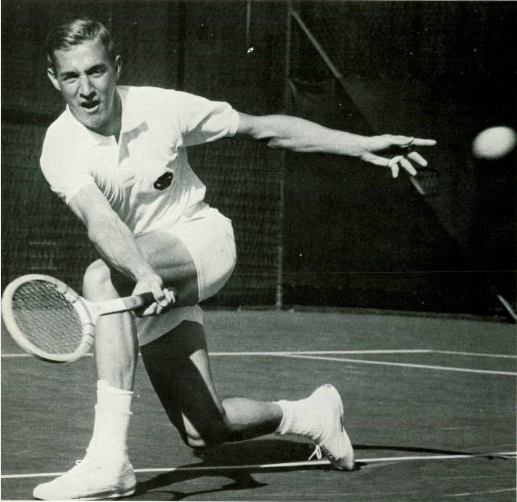 Before the Bryans, the Woodies, and Mac and Fleming, there was Stan Smith and Stanford transfer Bob Lutz. For years they were at the heart of the US Davis Cup team. They won back-to-back NCAA doubles titles and were part of a four-year run in which USC won the NCAAs from ’66 to ‘69. Lutz won the NCAA singles in ’67, but lost the ’68 final to Smith. Smith, “the Leaning Tower of Pasadena,” went on to win Wimbledon and the US Open and become No. 1. Once told he was too clumsy to be a Davis Cup ball boy, Stan went on to win seven Davis Cups. He and Lutz won five Slam titles.

In the heart of the Depression, a hard-working Paris, Texas boy earned a bicycle from the Saturday Evening Post. By mistake, the kid was sent a tennis racket. The Tour de France’s loss was tennis’ gain. Clarence Mabry would go on to coach a tiny Texas school across the street from the San Antonio Zoo into a fearsome predatory force with a nasty bite. For 18 of 19 years Trinity University, with just 1,800 students, was ranked in the top four. But for years Trinity did not win an NCAA title because Wimbledon was scheduled at the same time. In ’61, sophomore Chuck McKinley reached the Wimbledon final, where he lost to Rod Laver. As a senior he got it right – he beat Fred Stolle to win Wimbledon without dropping a set. He became world No. 1 and helped the US win the ’63 Davis Cup. Trinity’s No. 2, Frank Froehling, who was ranked No. 6 in the world, beat Roy Emerson to reach the ’63 US Nationals final, where he lost to Osuna. Andy Lloyd was a Forest Hills quarterfinalist and Butch Newman lost only one dual match in his collegiate career.

UCLA’s Arthur Ashe and Charlie Pasarell were the most impactful roomies in tennis history. Pasarell was a superb player, a powerful political force, and, as the desert prince who created the Indian Wells tournament, a game changer. And collegian Arthur would go on to become an icon. Bill Dwyre noted, “They came from places that tennis does not. Pasarell from the heat and streets of Puerto Rico, Ashe from the segregated courts of Richmond, Virginia.” Not surprisingly, they not only faced formidable foes but racism as well. In ‘65, even without Pasarell, the Bruins broke USC’s three-year stranglehold on the championships. Ashe won the singles, and then the doubles with Ian Crookenden. Pasarell did the same in ‘66.

Here’s the beauty of college tennis – a supremely individual sport becomes a wonderful team endeavor. Yet if you lose a top player, all can be lost. In ‘73, Stanford was on the cusp of greatness. They almost won the ’72 NCAAs. But in ’73 they didn’t just lose one top player, they lost their top two. Both Sandy Mayer, who weeks later reached the Wimbledon semis and would rise to No. 7 in the world, and the injured Pat Dupre, who reached the ’79 Wimbledon semis, were out. No problemo. John Whitlinger, Jim Delaney and Chico Hagey (who a few weeks earlier had been Stanford’s No. 7) all stepped up at USC’s new tennis center to take Stanford’s first title, in what would become a dynastic run of 17 championships. BTW: Whitlinger beat Hagey to claim the singles crown, and would coach Stanford for a decade.

At Wimbledon we asked Bradley Klahn, “What’s the best college team of all time?” He blurted out, “It’s got to be the Stanford team with the Bryans and Paul Goldstein that only lost three points all year. They were just nails, from top to bottom. Bob won the singles championship yet he was only their No. 3 player. They lost maybe two singles matches all year and a doubles point.” Mike Bryan added, “What we did in the ‘97-‘98 season will never be done again. We won 25 matches 7-0 and the other three matches were 6-1.”

“That team was a dream to coach,” added Gould. “It was the most selfless team I’ve had…It was probably the best team in recent history.” The top four players would alternate playing No. 1 through 4 and gladly made sacrifices for a team that went 28-0 and scored 26 shutouts. They were so good that when, in an Arizona windstorm, they lost their one doubles point of the year, the usually benign Gould let ‘er rip. Also explosive were the results: They were NCAA champions. Bob Bryan won the singles championship over Goldstein. The team had no dominant singles player. Goldstein reached No. 58 and now is Stanford’s popular coach. Newsflash: The Bryans became the best doubles team in history. Gould’s takeaway: “You never say never, but there is no way a team will ever do what this team did. It’s just humanly impossible.”

Trinity turned tennis’s California dream into a nightmare. For 12 years the collegiate championships had been “Prime Time” for LA – either USC or UCLA won. But in ’72, Trinity enticed USC to come to San Antonio for a dual match, dubbed the Super Bowl of Tennis. The Tigers beat the Trojans and went on to win all their matches that year. Led by Dick Stockton, who became world No. 8, and the considerable Brian Gottfried, ,who rose to No. 3 in singles and collected three Slam doubles championships, they went 36-0 and won the NCAAs for the only time in school history. In ’72, four of the eight quarterfinalists – Stockton, Gottfried, McKinley and Paul Gerken – were Trinitonians. Stockton edged Gottfried to win the singles championship. Never again would such a tiny school achieve so much.

Peter Smith’s Trojans won four straight NCAA team titles. USC was led by Steve Johnson, who won 72 straight matches, was ranked No. 1 and 2 in singles and doubles, and won back-to-back singles titles in ’11 and ’12. Johnson reached No. 21 in the world.