NEW YORK, NEW YORK:
• A Manhattan billboard claimed, “New York City: the only place where having a washer and dryer means you’ve made it.”
• Asked what she liked best about New York City, China’s Li Na said, “I like street No. 5.”
• The late commentator Dick Enberg said, “New York is a magnet for caffeinated overachievers.”
• Scot Andy Murray tweeted, “On my way to courts and all traffic has been stopped as there are men playing the bagpipes with American flags on top of them…weird.”
• Broadcaster Chris Fowler noted that the popular Andy Roddick “is married to Brooklyn [Decker] but he’s loved by Queens.”
• Li Na reported, “People in China say, ‘If you love your children, send them to New York. If you hate your children, also send them to New York.”

FEDERER DOES NEW YORK:
• Writer Lloyd Carroll claimed, “The whole tournament is about the right to lose to Federer.”
• Jon Wertheim said, “Federer is the belt that is holding up this tournament.”
• A short while ago, John McEnroe said, “What Federer has done over the past 18 months is the most incredible thing I have ever seen in tennis.” Mac added, “Roger could shove a pie in someone’s face and they would still love him in the locker room.”
• While prancing through the US Open players’ lounge in a darling dress, one of Federer’s young daughters was told after her Dad’s loss to “go give Daddy a kiss.”
• Similarly, after another loss, Roger said, “We walk away knowing more about our game and knowing more about ourselves.”
• Federer’s trainer Pierre Paganini said Rafa was a fighter who became an artist, while Roger was an artist who became a fighter.

THE LIFE AND LOVES OF ‘THE LOU’: What other American arena has gone through more mind-boggling incarnations than the Open’s Louis Armstrong Stadium? Originally named for America’s preeminent sewing machine company when it opened in 1964, the Singer Bowl would go on to become a key part of the 1968 World Fair.

While for 13 years the multi-purpose stadium was good enough to showcase boxing bouts and the riffs of leading rock guitarists, it had to be greatly upgraded before it emerged in 1978 as the 18,000-seat centerpiece of the US Open’s new Flushing Meadow site. Goodbye Jimi Hendrix, hello Jimmy Connors. (Fun factoid: It cost the USTA $200,000 just to clean up after the pigeons.)

The place was given a jazzy new name, Louis Armstrong Stadium. Thundering jets overhead and McEnroe overheads soon would battle in a curious dance as “The Lou” held court as the Open’s showcase stadium for 18 raucous, free-form years.

But soon it was obsolete. The creaky place that gave us Super Saturday in ‘84 was eventually considered not that super. In ‘97, the 23,000-seat Ashe Stadium opened. Now “The Lou” became a vastly oversized white elephant. In Ashe’s mighty shadow it was humbled by a painful but wise “less is more” move. Six thousand of its seats were chopped out and it became a far more intimate arena for the Open’s “B” matches.

Now, as the last part of an imaginative five-year plan, lovable Lou will have its fourth incarnation in 54 years. Open fans will delight in a beautiful, completely “New Lou” – a dazzling 14,000-seat tiered stadium that will bring fans far closer to the action. Sixty percent of the seats will be shaded. There will be a movable roof, a cutting-edge ventilation system, and separate day and night sessions. And hopefully, tennis’s most resilient arena will delight us with the sounds of some of Satchmo’s classics and a cut or two from an old Hendrix album.

HELLO, SERENA, HELLO:
• After enduring the worst defeat of her career, a 6-1, 6-0 loss in San Jose, Serena said, “I know I can play a zillion times better…I have so many things on my mind, I don’t have time to be shocked about a loss when clearly I wasn’t at my best.” Rennae Stubbs noted that Serena pulled out of the Canadian Open and had been quiet on social media and said, “Obviously there is something going on…[but] we don’t know what [it is]…She’s obviously trying to find her best again, but…”

• When mother Serena got confused about a question at Wimbledon, she joked with a big smile, “I have that mommy brain now. At least that’s my excuse.”
• After a writer broached the topic that Wimbledon umps now address her as Mrs. Williams, Serena said, “It still doesn’t register that I’m married. So much has happened in the past 12 months.”
• About five years ago, Li Na was asked what advice she would give Serena. She responded, “Don’t be married, okay? Yeah, if Dennis is not my husband we’d still [be] working [well together]. But after marriage is different, totally different, because men totally change.” We then wondered if the man is always to blame. “Yeah,” she answered, “the woman is never [at] fault.”
• In ’09 Serena noted that Kim Clijsters was faster on court after having her daughter, and mused, “Maybe I should have a baby and then I’ll come back faster.” Asked what she would call her kid, Williams replied, “Wilson.”
• Time once claimed, “When Serena is on, she’s unbeatable. When she’s not, the ball boys wear cups.”
• Madison Keys said what she most admires in Serena is that no matter how much she had achieved, she always wanted more – she was never satisfied. When Serena was then asked where she gets her passion, she said, “It was something I was born with. I always want to continue to go forward. I don’t like to be satiated with a great result. I want to continue and do more. That’s just who I am.”
Serena was then asked, ‘What’s the balance between wanting something so much but not wanting it too much? Some say they’ve almost been defeated by wanting something so much.”
She replied, “That’s what happened in the first round [at Wimbledon]. I wanted it so much – it was stressful. For me, my balance is just taking deep breaths, just calming down. I don’t know how to find that balance. I clearly am not the best at finding it because I’m always worked up a lot on court.” 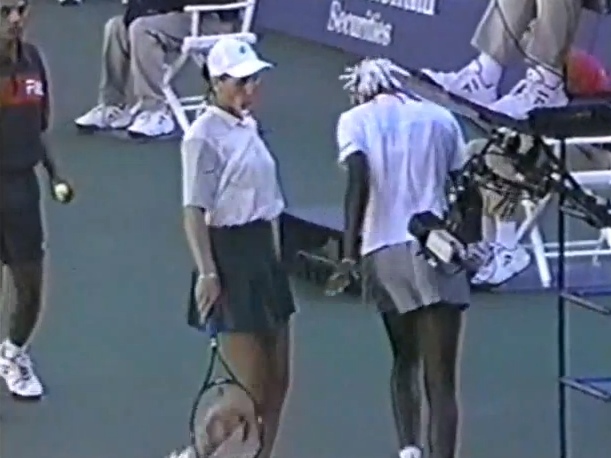 ANIMAL FARM – OF MONKEYS, DOGS AND TURKEYS:
• In ’07 Romanian Irina Spirlea refuses to get out of the way of Venus and the two collide in the Open’s infamous bump issue. In her subsequent press conference, the Romanian uses an expletive to describe Venus and is fined $5,000, and Venus’ father Richard refers to Spirlea as a “big, white, ugly turkey.”
• At 19, Sampras became the youngest US Open champ ever. Then, after losing the next year, he said, “Maybe I can go back to my normal lifestyle now…The monkey’s off my back a bit.” Jimmy Connors was not pleased. “What? Don’t tell me that!” he roared. “That’s the biggest crock of dump! Being the Open champion is what I’ve lived for. If these guys are relieved at losing, something is wrong with the game and with them.” P.S. Sampras came back to win four more Open titles.

THE POWER OF PROTEST:
• When officials refused to give a bunch of players a room to announce they would be forming the ATP, the group of protestors went just outside the Open’s gates and held a dramatic press conference.
• The day after being honored at the ‘92 US Open, Arthur Ashe was arrested in front of the White House for protesting the treatment of Haitian refugees. He then suffered a heart attack.
• Protestors objected that the powerful statue of Arthur Ashe didn’t have any clothes. Steve Rushin noted that a few hundred yards from the naked and anatomically incomplete figure “was a fundraising stand labeled, as if in a remedy, ‘Arthur Ashe Endowment.’”
• When the ‘87 semis match between Steffi Graf and Lori McNeil spilled into his air time, newscaster Dan Rather stalked off his set and CBS was left with a black signal for six minutes.
• Writer Filip Bondy objected on constitutional grounds to a draconian security form all writers had to sign after 9/11. He refused to sign and was reduced to covering the tournament as a fan. The form called for criminal background checks and made writers waive legal rights. Bondy claimed it took away his “basic American right to sue the agency’s butt off if the investigation is messed up and my life is ruined forever.” All of this prompted Bud Collins to note that if all the writers refused to sign, the FBI would have to cover the Open. And to this day controversy remains whether James Comey would or wouldn’t be a good tennis writer.