JIMMY CONNORS – My Sweetest Win: The US Open has always been my stage and the crowd my people…Walking out under the stadium lights, flashbulbs popping all around…the tingle in my fingertips…That insane New York energy surging from the fans…The fact that [in ‘83] someone in the crowd wanted to kill me didn’t actually bother me as much as my little toe…[that] had become swollen and infected. On the morning of the final against Lendl, I could barely walk …The doctor shot a powerful painkiller into my foot …When you rely on your footwork as much as I did, especially against a guy like Lendl – superfit, four inches taller, eight years younger…having a leg that stops at your ankle might be a problem…[Lendl] fought very hard…before a crosscourt forehand won me the championships for the fifth time. I acknowledged the absolutely incredible fans as they chanted, “Jim-eee! Jim-eee!”…Of all my wins, this 100th was probably the sweetest.

JOHN McENROE – Jimbo Taught Me: The 1984 Super Saturday [when he beat Jimmy Connors in a late-night thriller for the ages] – that brought us all in for the whole nine yards. It seemed to spark talk [about tennis] that we hadn’t heard before. It brought the Open to a bigger level…There were two great matches before me. Even though it was extremely satisfying to pull off, it was 11:20 p.m., [and] I had to play at 4 the next day. So I wasn’t able to enjoy [it] the way I would normally. People were buzzing, there was an energy, a feeling about the whole day. [It] was a moment that was going to be…etched in time. I learned a lot from Connors. He made me compete harder and find another gear. I saw the Nadal of our time who gave so much effort. To be able to match that to a degree was something that made me very proud.

GORDON SMITH, USTA EXECUTIVE DIRECTOR – White Boy, Black Champion: I go back to US Open Number One. In 1968 I was a 15-year-old kid in the southern town of Rome, Georgia. All we had was a black-and-white TV, and I was watching Arthur Ashe win. Right away I went out into the carport and started hitting balls off the garage door. It was 1968 and that wasn’t very far from 1964 [a tumultuous year in the history of the civil rights movement]. I was just a white kid in little Rome, Georgia. But I was inspired by Ashe. That day I fell in love with this great game and have been the Executive Director of the USTA for the past ten years.

SLOANE STEPHENS – Reality Check: I played Shahar Peer on the old Grandstand, [in the] second round and it was a really big deal. That was long ago. I’m so old now. It was late afternoon and like the best thing in the world. I was like, ‘Oh, my God, this is what it feels like to play at the Open.’ Then fast forward to last year. I was playing on Ashe against Venus. It was 5-all in the third, and I hit a backhand down the line and the crowd went berserk. And I was like, ‘Now this is what it feels like to really play at the US Open.” I had two moments where I was like, “Wow, that was intense.” I thought I knew what was it like at the Open and then I really felt like what it was like.

CHRISSIE EVERT – American: Every time I walked out on stadium court, I felt the support and the excitement of the crowd. Even though it’s at the end of the year and everybody’s starting to get tired, it was very motivating and inspirational to be an American and step out on court. It’s a feeling I never felt in any other tournament. It’s being American. There’s a lot of patriotism. John McEnroe, Jimmy Connors, Billie Jean and I were favorites.

BILLIE JEAN KING – A Full Circle: I was at a loud Philadelphia Freedom match at Cabrini College when USTA President Franklin Johnson called me and he goes, “Hi Billie, I’m so happy. We’re both from Southern California. We’re going to name the USTA facility after you.”
I said, “I didn’t hear you right.”
He said, “Yes, you heard right. We’re going to name the facility for you and I’m so proud, because you’re from Southern California and I can do this with you. “
I was speechless. I was like, “Really?”
I thought, considering what we had been through with the USTA and all the challenges of the 70s.I wanted the USTA to do a tour because the men were getting rid of women’s events. I asked the head of the USTA, Alastair Martin, “Would you start a tour for us?” Two minutes before we signed those one-dollar contracts with Gladys Heldman, I said on a pay phone, “Alastair, if you’re willing to do a tour, as I’ve been asking, then we won’t sign with Gladys to start our own.” He goes, “Don’t sign that. You’ll never get to play again, but we won’t give you a tour.”
I said, “Alastair, you’re leaving me no options.” So, Gladys had everybody line up and I said, “Just give us a dollar each, it’s still as binding [as a bigger contract].” The USTA sent us a telegram saying, “You can’t play, you won’t be able to play Fed Cup. You won’t get a ranking.” So, when you think about that and that now the whole facility is named for me…Every time I walk in I go, “It’s been a full circle.”

US OPEN REFEREE BRIAN EARLEY – One Moment in Time: Whitney Houston was singing “One Moment in Time,” but not on the night in ’97 when we opened Ashe Stadium. It was the night before, when we were practicing. I was thinking, “How did I ever get this lucky, to be right here at this moment?” And the interesting thing was that she was famous for not showing up for rehearsals.

MIKE BRYAN – They Thought We Were Ball Boys: Bob and I played our first Open when we were 17. We were wide-eyed and bushy-tailed. They thought we were ball kids. We weighed 130 pounds. They wouldn’t give us badges. They wouldn’t let us handle balls. They wouldn’t let us on the practice courts. We insisted, “Hey, we’re in the tournament.”
It was funny. In our first Open we watched every match. We sort of lived in the Stadium, because we’d never watched live. We loved Agassi. It was ’95 when he played Sampras in the finals. He was on a roll that whole summer. It broke our hearts when he lost.

ANDY MURRAY– Upchuck: It was the first time my wife was watching me play. It was in the first round on the grandstand against Andrew Pavel and I vomited on his bag.

MARTINA NAVRATILOVA – Tears and Titles: I’ve had so many. I defected in ’75, I lost to Tracy [Austin] in the ‘81 finals, yet totally won the crowd over. In ’84 when I won I was crying because I was sad that the crowd was against me. Then in ’87 I won the triple crown [singles, doubles and mixed]. Then there was winning my last title ever, the 2006 mixed doubles with Bob Bryan. There were times when I shouldn’t have won, but I did. And times when I should have, but I didn’t.

PAM SHRIVER – Not In a Million Years: I got to the finals as an amateur in ‘78. It was my first Open. I’d come up from Maryland and was seeded 16. But not in a million years did I think I’d be in the final. It ended up being my only major final. I was the first major finalist to play with an oversized racquet [a Prince], and the last amateur to play in a major final.

JOHN NEWCOMBE – ‘Get the Hell Out’: Going to the semis of the doubles with Fred Stolle when Fred was 42 and I was 47, and we lost to McEnroe and Fleming on Center Court in a tiebreaker on the fifth. There wasn’t an empty seat anywhere. That had never happened before in doubles. Then there was Super Saturday when I started play against Stan Smith in the over-35s. I was working for CBS and the producer sent a message, “Get the hell off of Center Court, you are holding up the program.”

JIM COURIER – ‘A Slice of History’: The first Open I played I lost early, but I came back for a junior award and with my pass snuck onto the court to watch the last game as Steffi Graf won the Grand Slam. It doesn’t happen that often. I was just coming into the game and it was pretty amazing to witness a slice of history. I’ll never forget that feeling of electricity when she was playing her last game to close it out.

DONALD DELL – Austin Powers: Seeing Arthur Ashe win in ’68 and Tracy Austin beating Navratilova and Evert back-to-back when she was sixteen in ’79. It was unheard of. She was sixteen and goes out and one day after another beats the two best in the game. She remains the youngest winner in Open history. It’s amazing. 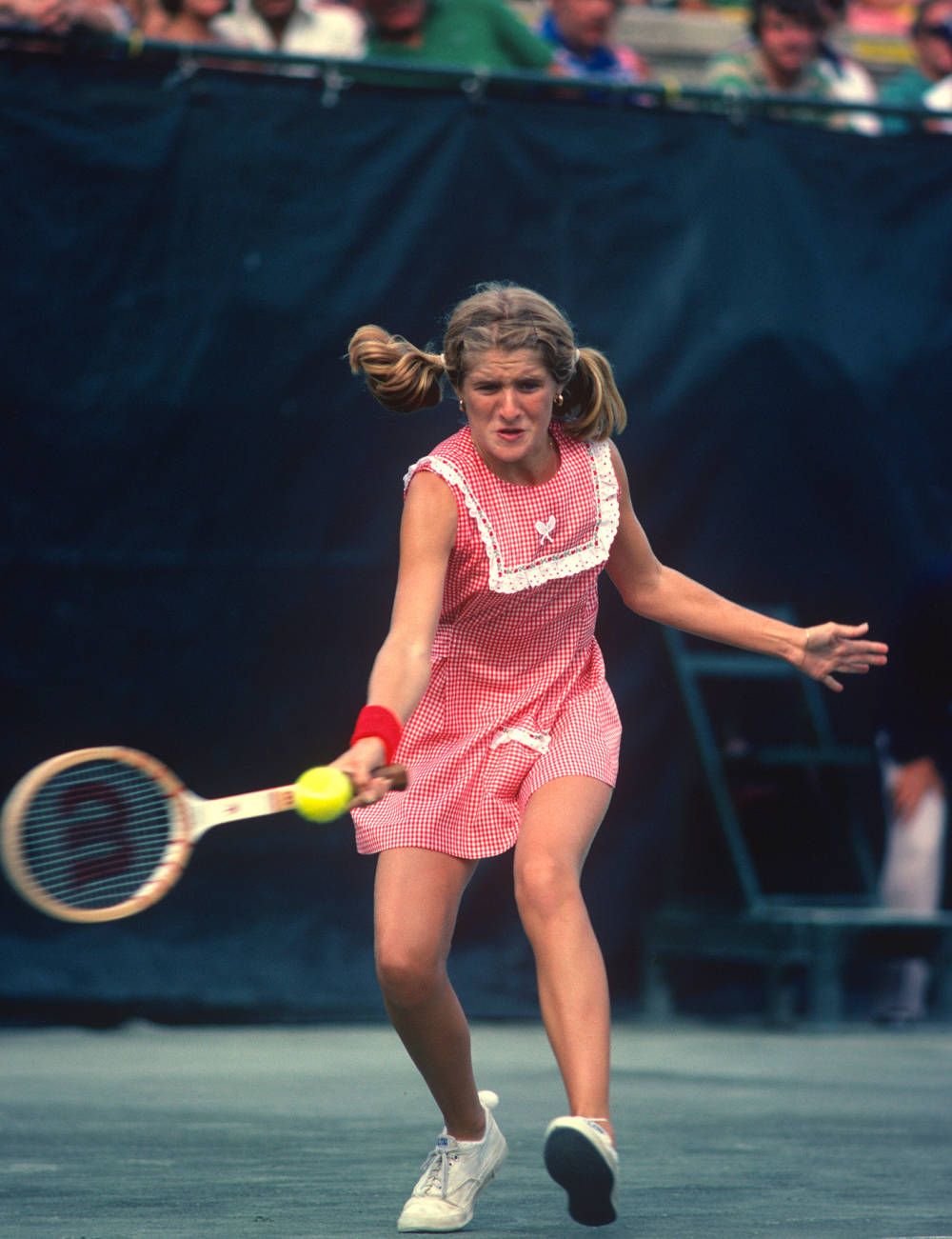 TRACY AUSTIN – The President is Calling: In ’77, I was 14 and had just beat Sue Barker, who was No. 4 in the world. It was at Forest Hills – a club that was so different from Flushing Meadows. My parents were watching my brothers play doubles and I was just wandering about when somebody came up and said the President is on the phone and wants to talk to you. I’m like, “Is somebody pulling a prank”? So I got on the phone and the President [Jimmy Carter] congratulated me. I’m 14 and wasn’t full of a lot of words. We certainly didn’t talk about inflation.

PAT McENROE – Little Brother Is Watching: Forehand lob, backhand crosscourt, topspin lob – I was a kid watching my brother beat Borg in ‘81. It forced him out of the game. But was bad for John’s career.

WAYNE FERREIRA – After Midnight: I finished my match against Younes El Aynaoui at 3 a.m. and the only people that were there were a thousand Moroccans.

JOHN ISNER – Kills Your Body: I had one of the latest match finishes of all time, at 2:26 a.m. – I lost to Phillip Kohlschreiber. It kills your body. I felt terrible the next day.

NOVAK DJOKOVIC – Flash Forehand: I’ve lost more finals [five] at the Open than at any other. But I’ve also won two titles. I missed it last year and can’t wait to go back. The Open is the only Slam I’ve ever missed. My favorite moment was that return of serve when I was down two match points to Roger in the fifth in the ‘11 semis [and] I hit that crazy [forehand on the line] return cross-court winner.