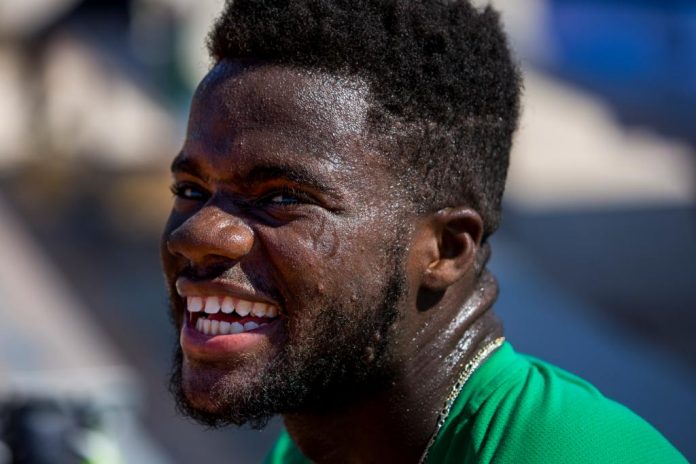 FRANCES TIAFOE EMERGED OUT OF THE JUNIOR TENNIS CHAMPIONS CENTER TO BREAK INTO THE TOP 100. NOW CAN HE REACH THE VERY TOP?

He had no choice. It was a matter of life and death. When Frances Tiafoe Sr. fled the unspeakably brutal civil war in Sierra Leone, with all its random kidnappings, child soldiers and wretched mutilations, he began one of the greatest tennis emergence stories since Richard Williams saw Virginia Ruzici win $40,000 on TV and said I’m going to have some daughters, teach them tennis and get rich.

After all, Tiafoe Sr. came to Maryland, managed to get a construction job with a company building a tennis center, and then became the maintenance manager at the center, which allowed him to live, with his twin sons, in a modest storage room.

One of his kids, Franklin, had modest interest in the sport. His other son adored it. When he was just three, Frances Jr. roamed about the considerable Junior Tennis Champions Center (JTCC) in College Park Maryland, picking up assorted rackets and kickstarting a love affair with the game. The kid had talent. His passion was insatiable and he soon began to make waves. He became the youngest player ever to win the prestigious Orange Bowl tourney, the youngest to win a Slam match and eventually the youngest player in the top 100.

Both dark and bright, the Tiafoe tale with its irresistible story lines seemed like a tease, right out of central casting. Men’s tennis hadn’t seen a Grand Slam champ with an African heritage since Yannick Noah in 1985, and it’s no secret, American men’s tennis is still in the midst of a devastating 15-year Grand Slam drought. Patriots are quietly beginning to wonder, “Can this kid actually take us to the Promised Land?”

Young and talented, Tiafoe offers big smiles and bigger forehands, great movement, jaw-dropping creativity, increasing smarts and a great nickname – Big Foe. His aspirational story tantalizes – from a broom closet to booming winners. No wonder the hype machine – as it had done with many – revved up. Newspapers dissected his every move, and “60 Minutes,” CNN and HBO all produced glowing segments. Plus, the kid was a charmer with a chill sense of humor.

As a teen he joked, “I’ve been on a tennis court all my life. The only thing that’s been there longer is the net post.” When, at a Florida tournament, the passionate sounds of a love-making couple in a nearby apartment interrupted play, Tiafoe quipped, “It can’t be that good!” Tiafoe’s generational comrade Taylor Fritz put into words what so many know: “What makes Frances unique is his personality. He’s electric. You always know when he’s in the room, because he’s just laughing and talking, cracking jokes with everybody.”

All the while, critics wonder whether Frances can be truly unique on court. Can he live up to the hype? Yes, we know the kid likes the bright lights. On the biggest stage in the sport [the US Open’s Ashe Stadium], he took Federer to five sets and Roger soon sang his praises. Tiafoe brought down the game’s king-in-waiting, Alexander Zverev, in Cincy, and was part of the fall mix at the Next Gen tourney and the Laver Cup. But when tennis for real started this year, he faltered badly in distant Australia. Clearly he prefers the home cooking of America’s East Coast. He beat Sebastian Korda and Dudi Sela to reach the quarters of the New York Open before scoring his first big breakthrough.

Every player wants to actually win a tourney. It’s not that easy (just ask Anna Kournikova, who never did it, or Sloane Stephens, who struggled mightily before she did). In Delray Beach in February, Tiafoe came from behind to beat his idol, the former US Open champ Juan Martin del Potro. He could have rested on his laurels, but then in just one day he scored two stunning generational wins when he beat Canadian wunderkind Denis Shapovalov and Aussie Open semifinalist Hyeon Chung before claiming the title by besting German Peter Gojowczyk, who’d defeated Americans 14 times in a row.

Tiafoe is a tennis geek. One of his coaches at the JTCC, Vesa Ponkka, told the Washington Post that Tiafoe’s game was the product of “a perfect storm…He’s hungry. He has nothing else. And his love of the game is so deep, so pure. Some players love winning or money or traveling, He loves everything…He even loves the smell of the new balls. He loves how the ball sounds. He loves things that are much more important than money. He plays the game for the right reasons. None of us taught him that. It’s just that tennis was his best friend, and he took care of his best friend.”

Tiafoe still spends a lot of time at the off-the-usual-grid Junior Tennis Champions Center. He told IT, “I love it, it’s home. You have all the facilities you want, a great gym. It’s a really family-oriented club and everyone is really friendly.”

It’s not hard to imagine that Tiafoe feels a certain responsibility. His debt-ridden parents suffered dearly. His mom Alphina, who endured devastating horrors in Africa and was able to come to America because she won the immigration lottery, and when his dad went on to get a job at a car wash, he got there on a used bike.

Now the question is how far Frances’ game will go. He lost in the opening round at Indian Wells to Ernesto Escobedo. Still, Escobedo feels Tiafoe will “have an amazing career.” Tiafoe’s fellow Next Gen wannabe, Denis Shapovalov, concurs: “Frances is an unbelievable player. He has a really wild game with strange but very effective strokes. He hits the ball well and has a good eye. He comes up with crazy shots. It’s tough to play him. You don’t know what to expect.

“He can make any ball and hit ridiculous shots. He’s got a whip on his forehand that makes it so much heavier. He’s so fast and his hands are so good that he’ll run down crazy balls and hit ridiculous angles. You don’t see a lot of guys do that. Even when he’s down break point he can rip a down-the-line shot winner. Plus, he’s a super nice guy. We’re really good friends. I was happy he won Delray [Beach]. He definitely has a bright future. I’m more than sure that he’s got the level to lift Grand Slam trophies.”

But not so fast. Tiafoe has yet to get to the third round of a Slam, and the ATP is crowded with emerging stars. The road is perilous. The tour is a ruthless grind that rewards soul-deadening grit more than inspiring pizzazz. But the man-child from the same ‘hood that gave us Sugar Ray Robinson and Kevin Durant has a certain X Factor. His power, speed and athleticism, together with his inventive shotmaking, high tennis IQ, love of the big stage and passion for the game make for a dynamic package.

And then there’s his heritage. There’s no question his parents survived life at its very worst – such a severe fate. Now tennis fans want to know – what will be the