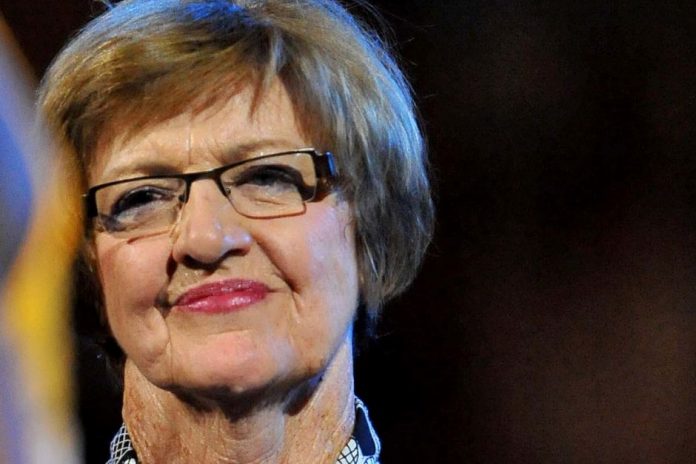 It was a sparkling night like no other. Twenty years ago, in 1997, the US Open gave us the most magical opening in tennis history – the debut of Arthur Ashe Stadium. Over 23,000 gathered. Everywhere you looked there were celebrities, tennis legends, and the greatest among us – including South Africa’s Bishop Tutu. Whitney Houston belted out an inspired version of One Moment in Time. Everyone was elated. Onr security guard asked me, “This is so good – can they hold Wimbledon here next year?”

I chuckled and said, “Well, that would be impossible.”

Speaking of impossibilities, nine months earlier, I’d believed it would have been a miracle if the stadium were named for Arthur Ashe. After all, in December, 1996 – despite some calls I’d made and a letter to the USTA President I’d published – the USTA Board unanimously voted to name their new $262 million venue the United States Tennis Association Stadium.

“Oh well,” conventional wisdom groaned. A leading commentator noted that there was plenty of blame to go around – but nothing could be done.

I passionately disagreed. I felt that the world’s biggest tennis stadium should be named for our greatest ambassador, a great player and Renaissance man of wisdom and conscience whose life had touched so many and whose memory would inspire millions.

I immediately reached out to top players and key movers and shakers. I asked a lobbyist, “How can I do this? How do you change people’s minds?”

I wrote editorials, my phone bill spiked, I spent whatever public relations capital I could muster. To my shock, the campaign began to gain traction. Players === signed on in support. Top officials within the USTA reversed course, and began to push the initiative. My media colleagues began to back the cause. Clearly, if the USTA refused to change the name, there would be PR hell to pay.

Just two months later, the board unanimously voted to call the Flushing Meadow site Arthur Ashe Stadium. Hurray! We were all elated. The Ashe clan, tennis officials and politicians gathered for a celebratory New York press conference. Six months later, Ashe Stadium opened – you could feel the love. And for 20 years, Arthur’s good name has led to good times and good acts. His legacy of diversity and empowerment has been sustained.

Now, tennis faces another naming issue. It’s not whether to name a stadium for an inspired player. Rather, it’s whether to remove the name of an existing stadium due to the hurtful comments of a once dominant champion.

There is a sadness in Margaret Court’s eyes. The elder’s voice is harsh, unhappy, and reveals hints of bitterness. In an expansive era when tennis is bringing together cultures of every stripe and the USTA has a media campaign celebrating a sport that embraces diversity, Court is consumed by a painful, judgmental world of good and evil, hell and brimstone.

Yes, she’s a tennis giant – a legend. She won a record 24 singles Grand Slams, and, including doubles, has 64 Slam titles – just incredible!

What’s less incredible are her views, and a unfortunate propensity to step on people’s dreams. While Ashe was playing a pivotal and courageous role in dismantling South Africa’s wretched apartheid system, Court said in 1970 that South Africa “has the racial situation rather better organized than anyone else, certainly much better than the United States.”

In 1975 she disparaged Billie Jean King, saying she was a bad sport whose abortion and feminism diminished her, in Court’s view.

Then, in 1990, after Navratilova won Wimbledon, Court rained on her parade, saying, “I’d like someone at the top who the younger players can look up to. It’s very sad for children to be exposed to homosexuality…[Martina’s] life has just gone astray.”

Just recently, when the sweet, vastly popular Aussie, Casey Dellacqua, and her female partner welcomed their second child, Court criticized them for a second time, saying they were advocates of a “fatherless generation.”

Dellacqua countered, “I let it go [the first time] because it was a very happy time…I thought, ‘I’m not going to let anyone ruin my happiness,’…but when you start singling out my family…it’s not okay. My family does not deserve to be subjected to that.”

Sadly, Court lives in a world of fear, where frightful demons and lesbians lurk. She claims that, like Nazis and Communists, they are out to ensnare our children.

When the CEO of Qantas Airlines joined with 20 other Australian CEOs in support of marriage equality, Court, who is a minister at Perth’s Victory Life Church, announced she would boycott the airline. She once contended, “Tennis is full of lesbians…who led the young ones into parties.”

As for transgender people, Court recently asserted, “You can think, ‘Oh, I’m a boy,’ and it will affect your emotions and feelings…That’s all the devil.”

She added that, “…homosexuality is a lust of the flesh, so is adultery, fornication, all those things.” She contended that the gay movement was doing “what Hitler did, and that’s what Communism did, [they] got the minds of the children. It’s a whole plot in our nation and in the nations of the world.”

Despite her criticisms of many, she views others as bullies, and positions herself as a victim. She complains there is American money behind her critics, while she uses her views to gain funding.

The goals of Court’s Victory Life Church include:

• Stop homosexuals from brainwashing our children into homosexuality.

• Stop their influence on our leaders, who say that this is “normal behavior.”

Not surprisingly, there has been blow back. Andy Murray insisted, “I don’t see why anyone has a problem with two people who love each other getting married…It’s not anyone else’s business. Everyone should have the same rights.”

An Australian broadcaster asked, “Do you understand how hurtful it is for LGBTQI Australians when someone of your stature actively promotes the idea that they are not equal to you, that you’re better than them?”

Mary Carillo said Court was “shouting at the ocean; surely the seas will drown out her incessant cries of perversion.” She noted that Court claims to be a Christian and then asked, “But what kind? And where is the kindness?”

In a clever and passionate letter to “Margaret Court Arena,” Navratilova wrote, “When you were named after Margaret Court it seemed like the right thing to do…I had long ago forgiven Court for her headline-grabbing comments when she said I was a bad role model.

“It is now clear exactly who Court is: an amazing tennis player, and a racist and a homophobe. Her vitriol is not just an opinion. She is actively trying to keep LGBT people from getting equal rights (note to Court: we are human beings, too). She is demonizing trans kids and trans adults everywhere.

“Linking LGBT to Nazis, communists, the devil? This is sick and it is dangerous. Kids will suffer more because of this continuous bashing…

“We celebrate free speech, but that doesn’t mean it is free of consequences,” Navratilova added. “We should not be celebrating this kind of…philosophy. The platform [that] people like Court use needs to be made smaller, not bigger.”

As for Billie Jean King, the iconic sage said, “I’m big on acts of kindness and love – not hate. So I go, ‘What are you talking about? – Children and the devil?…Every child is never from the devil. I don’t get it…I don’t like it when she runs down my community…I don’t like any community to be run down. So it hurt my feelings.”

As for the name of the Margaret Court Arena (that’s owned by Melbourne and Olympic Parks Trust), there’s already an online movement to change the name, and googlemaps has already changed the name to Evonne Goolagang Arena. And clearly Aussies themselves will have to decide. Longtime Aussie star Sam Stosur said, “We’ll cross that bridge when we all get down to the Australian Open and [see] who wants to play on Court Arena and who doesn’t.”

To me, the naming of a stadium is all about honor and inspiration: honoring a great athlete and a person whose life story and message will inspire. Sadly, this is not the case with Court. But what to do?

Clearly, the situation today with Margaret is far different than with Arthur. Court is from a distant country. I know few of the key players in the world of Australian tennis. I can’t just pick up the phone and say, “You know what, Harry, we’ve got to do something!” The island nation has its own feel-good, free-form culture. Its nuanced history is very much its own. It has its own approaches to issues, whether they be immigration or marriage equality – which as yet, is not allowed there.

Plus, the uplifting process of naming an arena after an honored hero is far easier than stripping a name, which at first may seem harsh or punitive.

Here in America, buildings that honor men who were slave owners are being renamed, and New Orleans has removed its statues of Confederate commanders. Mitch Landreau, the city’s mayor, explained that removing statues that “celebrated a fictional, sanitized Confederacy…is not about taking something away from someone else…This is not about blame or retaliation. This is about showing we are able to understand, reconcile and, most importantly, choose a better future, making straight what has been crooked and making right was wrong.”

When Andy Roddick was recently inducted into the Hall of Fame, he noted, “The absolute icons of our sport were never scared to stand for something they believed in – from Martina, to Arthur, to Andre, to Billie Jean King, [as well as] Roger’s work with UNICEF…But tennis does not get the credit it deserves for the social changes that it’s helped curate over the years.”

So we are left with the question: will tennis remove from a high profile place of honor the name of a person who continually goes out of her way to express intolerant, hurtful views?

Opinions abound. But in the end, I’m confident that the same sport that embraces so many cultures, that named its biggest stadium after an African-American troublemaker, and that was able to heal a painful racial rift in Indian Wells, will sooner or later get it right.