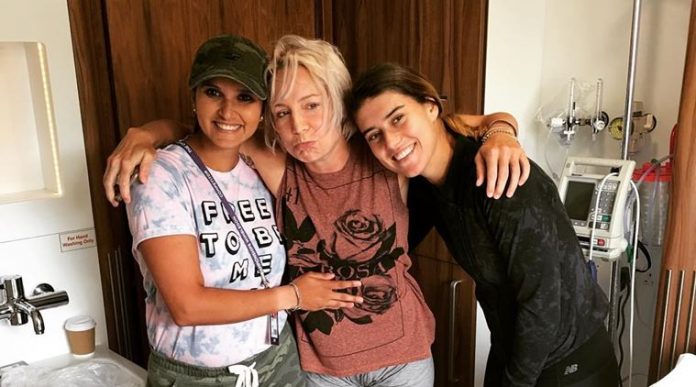 “Intriguing plot lines are blossoming all over the grounds as we reach the end of a fascinating, sunshine-blessed first week at The Championships.” – British writer Ian Chadband

1. THE BIG FOUR – BLOOD, TOIL, TEARS AND SWEAT: This country’s greatest leader, Winston Churchill, used four words to rally his people when the fate of his island nation was in jeopardy. He said all he could offer was “blood, toil, tears and sweat.” And all the Big Four in tennis – Federer, Nadal, Djokovic and Murray – have offered us is a storybook saga of scintillating excellence; an era of four great and quite different characters who have dominated on court, drawn millions of fans and taken the sport to a lofty level – who knew?

With Stan Wawrinka, they have won 51 of the last 54 Slams – incredible. And here this week, they hardly missed a beat. Only Murray lost a set. Not surprisingly, questions abound. Can Federer, who is all but a tennis god, follow up on his Aussie Open win and collect his 19th Slam? Can Sir Andy, who’s a knight, prevail on the final day and win back-to-back Wimbledons despite a suspect hip? Can Djokovic come out of his Serbian funk and “win one for the Andre” – Mr. Agassi? And can Señor Nadal again win back-to-back Slams, claim his 16th major and re-invigorate the now dormant “greatest of all time” debate?

2. DELICIOUS STORY LINES: Going into the second week, the women’s field was thinned mightily. Gone were possible winners such as No. 3 seed Karolina Pliskova and two-time champ Petra Kvitova. Now Venus Williams is the only player left in the draw who has won a Slam. On the other hand, an abundance of tantalizing story lines remains. Brit Jo Konta could prevail for her home country. Angie Kerber could prove she’s truly an elite No. 1 and win her third Slam in her last seven efforts. Lovely Latvian legend Jelena Ostapenko, the in-your-face 20-year-old French Open champ, could win back-to-back Slams. Simona Halep could avenge her recent loss in the French Open final, and Garbine Muguruza and Agnieszka Radwanska could erase their memories of losing Wimbledon finals. And don’t forget California power girl Coco Vandeweghe. With her big game and her new coach, Pat Cash, she could cash in.

3. SILENCE AND SORROW: A quiet legend, Venus Williams was brought to tears in a stunning press conference when reporters asked her to amplify on a Facebook post in which she’d said she was devastated by the fatal Florida car accident she was involved in. The stately Wimbledon interview room was reduced to an eerie silence as Venus’ body went limp, and time stopped as the iconic champion shared her sorrow. The poignant moment touched observers and gained her fans and well-deserved sympathy. Now there is video evidence that according to observers indicates that she was not at fault in the accident, which in led, in two weeks time, to the death of a 78-year-old man who was in a car that plowed into Venus’ big, slow-moving black SUV.

4. THE FALL OF AN AMERICAN ORIGINAL: Inexplicably, the top two most compelling individual stories at Wimbledon were about the agony of two great American champions: Venus, who has won 17 singles and doubles Grand Slams, and Bethanie Mattek Sands, who has won seven Grand Slam doubles titles. Mattek-Sands and her partner Lucie Safarova were hoping to prevail at Wimbledon and thus win the women’s doubles Grand Slam. But as Mattek-Sands, a wildcard into the singles event, approached the net on a routine, “done-it-a-million-times” shot, she slipped and her knee buckled horribly. Hapless and on her back, she writhed in excruciating pain. She called out for help and shouted expletives. (You would too, if it happened to you.) Her opponent, Sorana Cirstea, her husband Justin and her physio tried in vain to comfort her – “You can do this … Don’t look at it.” Unfortunately, it seemed forever until a medical team arrived. Bethanie is now waiting for additional tests, and surgery is likely. Long ago, one British writer Eleanor Preston said Mattek-Sands’ once outrageous outfits reminded her of “a church group doing a stage version of ‘Barbarella.’” The BBC called Bethanie a “bright, bubbly character.”

To her fans, Mattek-Sands, who is the No. 1 doubles player in the world, is a great, fun-loving American original who loves to break the mold. As many pray that her injury is not career-ending, critics ask about the quality of Wimbledon’s grass courts. A simple headline captured it all: “Slippery when dry.”

5. BORED ON THE FOURTH OF JULY: To his credit, Bernie Tomic, who has an unconventional game and an unconventional mindset, spoke up and honestly expressed his truth – clear and unfiltered. But what he confided was upsetting. It undermined the core basis of elite sports, i.e. that if nothing else, athletes should always put forth an all-out effort. The 24-year-old Aussie said he wasn’t really motivated. Rather, he was bored, used medical time outs to intentionally change the rhythm of his match, and was just playing for the money. Some gave the Aussie kudos for being truthful, but overall he was hammered for his “Who cares?” entitled ‘tude. He was fined $15,000.

6. WILL BRITANNIA RULE? All of Britain is hoping for a celebration like few others in the history of British sport: a sweep by Team UK, with “God Save the Queen” victories by Murray and Konta. Ironically, neither Murray, who is a Scot, or Konta, who was reared in Sydney, Australia, are English natives.

7. NATIONAL NEWS: Inexplicably, Australia and Czechoslovakia, two countries with grand lawn tennis traditions, stumbled badly. Not only did Australia’s two leading players – Nick Kyrgios and Bernie Tomic – lose early and without glory, the entire Aussie singles contingent vanished. Similarly, as No. 3 seed Karolina Pliskova, (a trendy early pick for the title) and two-time champion Petra Kvitova (a favorite of the bookies) and Lucie Safarova faltered, Team Czechoslovakia was decimated. But there was one bird who flew against the wind. Former Wimbledon finalist Tomas Berdych is into the fourth round. He plays Austrian Dominec Thiem on Monday. Venus, Coco Vandeweghe and Sam Querrey are America’s remaining hopefuls.

8. QUIT WITH THE QUITTING: Wimbledon received a dose of shock therapy. On Tuesday, Centre Court endured back-to-back withdrawals in high-profile Djokovic and Federer matches, and by the time the first week was finished, Wimbledon seemed like a steamy episode of “General Hospital,”  with a total of nine withdrawals. Observers complained that players were just going through the motions to collect their $45,000 first-round prize money. Some countered that players struggle all year just to make it into the rich Grand Slams, whose prize money allows them to survive on the pricey circuit. Still, most agreed with those reformers who proposed innovative measures to right the wrong.

9. THIS CAN’T BE BRITAIN: So what’s going on with the warm, dreamy English weather? We hope your British uncle isn’t a brolley salesman. After all, it used to be said that travelers can make up for all the money they spend on expensive British lodging by what they save in not having to buy sunscreen. But not this year. Except for one oh-so-brief delay, the sun shone throughout the first week and temperatures soared. Boris Becker noticed that since Wimbledon built its pricey roof, the weather’s been grand. In fact, the roof’s prime use this week has been to shield the parched Centre Court grass from the heat of the morning sun.

10. TENNIS MARCHES ON: The two highest-profile women players of our era – the pregnant Serena Williams and the recently suspended but now injured Maria Sharapova – were far from The All England Lawn Tennis Club. Venus said she missed her sister, who will drop out of the top ten after Wimbledon. Maria’s controversial agent was on hand. But few really noticed. After all, tennis does march on.