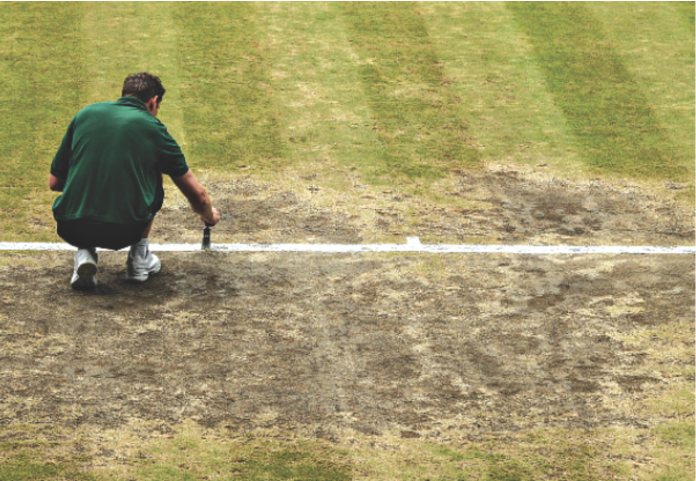 ALL IS WELL IN THE TENNIS KINGDOM: Roger Federer – elegant in white – is back on court on Wimbledon’s Centre Court. There is peace in the valley.

JUST WONDERING: Is it some kind of record that Luxembourg’s Mandy Minella lost her first round match while being 4.5 months pregnant?

THE MAN WHO CAN’T STOP DISSING SERENA: Just last week, John McEnroe got himself in a world of trouble when he said Serena would only be ranked No. 700 in the ATP rankings. Here in London at an event to promote his new book, he again spoke of Serena and said, “She told me I was invading her privacy. Then she’s all over Vanity Fair in a pose like Demi Moore.”

WIMBLEDON CANCELS THE REVOLUTION: Britain’s House of Commons will now allow male members who are not wearing ties – but not so in the Wimbledon’s Royal Box. Wimbledon chief Richard Lewis insisted, “The tie revolution will not spread. It’s part of the charm of Wimbledon.”

WITHDRAWAL FEVER: There were back-to-back withdrawals on Centre Court by the opponents of Novak Djokovic and Roger Federer. Fans groaned – what a shame. Officials twitched – what a problem. Federer joked with Djokovic that they should both go back on court and play an exhibition set. Many chuckled and Roger said there should be changes. Reformers suggested that players who are hobbled be able to withdraw before a match and still get their hefty first-round payment a couple of times a year. At Wimbledon, a first-round loser gets over $45,000. In two days here there were six withdrawals. That’s not great.

CURIOUS QUESTION: In order to get an explanation on why Novak Djokovic hired Mario Ancic – who is now a New York broker – reporter Russell Fuller asked Novak, “Why have you hired a Wall Street broker to coach you?”

A SAD TALE OF TWO CHAMPIONS: Decades ago, Boris Becker and Stefan Edberg were fierce rivals. Becker recently filed for bankruptcy. Edberg is working on his second fortune.

THE MOST DIGNIFIED STAMPEDE IN THE WORLD: At 10:30 each morning, thousands of people in the Wimbledon queue wait by Gate 3  behind a white chain. Three stately, rather self-important, stewards then release the fabled chain and the vast throng from across the world make their charge.

Now, there is a curious outbreak of sophisticated chaos – jog quickly, retain a semblance of decorum, don’t elbow that Canadian teen who’s passing you and certainly don’t cut off that eighty-year old Yorkshire grandmother who’s toting a picnic basket with her granddaughter. Left, right and center, the fans seek their chosen destination: distant Court 18 with its great site lines, or maybe Court 8, where there’s a showdown between a Dutch and a Romanian woman, or maybe they just sprint to stake out a prime spot high on Henman Hill (or is it Murray Mount?). The daily ritual has not, as yet, led to any deaths. It’s called the most dignified stampede in the world.

“WE ARE HERE TO TALK ABOUT BRAS”: Officials made Venus Williams change her pink bra to a white one. Genie Bouchard endured a similar fate two years ago…Many years ago at a press conference to promote her endorsement of a female foundation garment, Russian sex symbol Anna Kournikova contended, “Women should wear this bra in all circumstances.” Then when a reporter asked a question about her personal life, she shot back, “No, we are here to talk about bras.”

GO FIGURE: Brad Gilbert said that any of 40 women could win Wimbledon… After Andy Murray was searched by security, the guard asked the star to take a selfie with him…Murray, who lost to lucky losers in his last two matches, won his first round match over lucky loser Alexander Bublik…Jana Cepelova lost her first-round match to Caroline Garcia in 50 minutes. That’s about $600 a minute.

Why Geezers Have Taken Over Professional Tennis

The Glow of Whites, the Groan of the Crowd

Can Anyone Match the Mental Strength of Raging Connors?

Strawberries and Cream, and Submachine Guns – Wimbledon Keeps Calm and Carries On

INCLINED FOR KLEIN: It’s a horrid journalistic violation, but Inside Tennis kind of hoped young Brydan Klein would have a dandy Wimbledon. After all, at the Nottingham warm-up he was the victim of the worst call of the year when ump Mohamed Lahyani penalized him for loudly calling himself a “stupid, stupid person” and “an idiot.” The ruling cost Klein the match. To their credit, when Klein complained about his fine, the ATP rescinded it. Yes, there still is a little justice in this world. But then again, maybe not – Klein lost his first round match.

“He’s not the most elegant walker, but look at that.” – Wimbledon Live on Andy Murray’s awkward gait

THE MOST TORTUOUS QUOTE OF THE SEASON: Stan Wawrinka said that in sports, to get to the top you “have to be tortured.”

YOU KNOW YOU ARE IN BRITAIN…: When the Wimbledon radio coverage features a broadcaster with a lovely Northern Ireland accent…When people talk of Englishman Jeremy Bates as a tennis hero…When Alexandr Dolgopolov starts to waver against Federer, and the commentator says he’s “in a spot of trouble.”

BORED BERNIE TELLS REPORTER TO ASK ROGER TO GIVE $500 MILLION TO CHARITY: Aussie Bernard Tomic lost in straight sets and then admitted he was bored and that nothing motivates him. He admitted he felt “a bit of guilt.” But when asked if he would consider giving his prize money back, he said, “Well, if you ask Federer to give back $500 million.”

TIGER AND THE DJOKER: John McEnroe drew a comparison between Tiger Woods and Novak Djokovic. The broadcaster noted that Tiger’s career never got back on track after personal problems flared and that Novak hasn’t thrived since his problems last summer. But Mac felt Novak would again win big-time. He reflected on Novak’s spiritual journey, in which the Serb speaks of inner discovery and harmony. Mac commented, “I’m not sure all this – the kisses and hugs – are the right thing to do.” Others disagreed, noting that they felt it darn interesting and rather courageous that such a high-profile athlete would seek meaning and peace in such an open, unafraid and different manner.