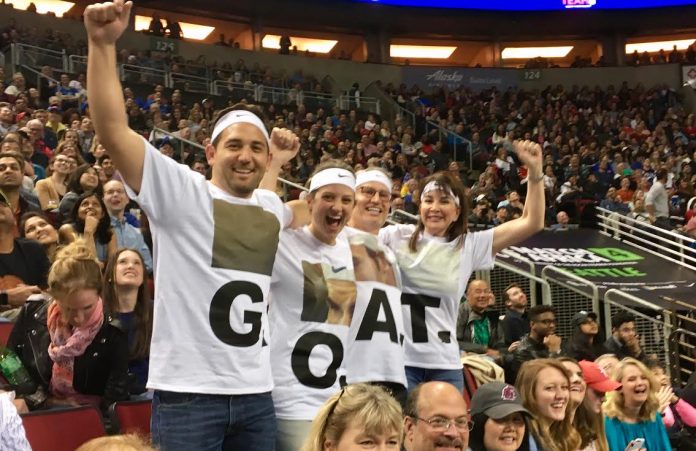 When he was a kid, Roger Federer played Marco Chiudinelli for a big prize – tickets to the qualifying rounds for the big tournament in Roger’s hometown of Basel. Emotions were high. Roger fell behind and wept. Chiudinelli came over and consoled him. Then Roger kicked into gear. Then it was Marco’s turn to cry. Roger comforted him and lost, 9-7 in the third.

Over the years, Federer turned into the prevailing genius of our game – who knew! He would go on to battle for the biggest titles in the game.

But on this northwestern night, the game’s great ambassador would join Seattle’s very own Bill Gates to play in a match for something bigger – the education of African kids. Roger’s Match for Africa 4 was to benefit his Federer Foundation, which works in the poorest sections of southern Africa.

How did it happen? Well, Federer and Gates have two things in common: a love of tennis and an eagerness to use their ample success for good. Federer doesn’t just sun himself on an island in the Seychelles. Gates is one of world’s great philanthropists. Both thrive on helping others.

Tonight, in the biggest moment in the history of tennis-starved Seattle since former pro Tom Gorman beat Bjorn Borg in a Team Tennis match decades ago, adoring fans came out in full force to see Roger, Gates, John Isner and Pearl Jam guitarist Mike McCready. They descended upon Key Arena by foot, car, plane and even sea plane.

“We landed on the water today at about 12:30,” said Piers Henwood, alongside Furey Higgins. The two friends from Victoria, British Columbia — about a 35-minute flight — touched down in style, their plane landing in the harbor under the shadow of the Space Needle. Both in their mid-40s, they of course sported obligatory Federer hats. They had also scored front-row seats.

“There’s just not much tennis up here ,” said Henwood, a serious player who nearly made the team at Stanford. He now works in the music industry.

“I work with a lot of artists and musicians who don’t relate much to sports, but I tell them that when you see Federer in person, it’s like seeing art. Physically he’s blessed, but the way he thinks his way through the game, the way he moves, it’s like an artist.”

As for the proceeds of the match going to Roger’s foundation, all the better. “For me, that matters,” Henwood added. “Federer is now towards the end of his career, and that an athlete has a legacy after his career is so important. He’s such a powerful global icon and it’s nice to see him focus on this in his later years.”

Paul Moscal, a 19-year-old Romanian, also arrived by plane — the regular kind. Now living in Arizona, he jumped at the chance to see his hero for the first time. “I’m so excited,” he said, eyes and smile beaming. He wore a green RF shirt he purchased on Amazon – coincidentally a Seattle company – whose employees were out in force among the 17,459 fans who filled Key Arena. “Roger’s modest, he’s simple, and he just plays such good tennis,” said Moscal.

Geren Shankar was also seeing his hero for the first time. The 38-year-old, originally from New Zealand but now living in Portland, once had tickets to see Federer play Novak Djokovic in the 2009 US Open semis. The match was rained out, and he wasn’t able to return the next day.

“And that was the match he hit that between-the-legs shot!” Shankar said. Now, finally, Geren was excited to see the mighty Fed.

“Just the smoothness, the ballet-like performance is what I love,” he said. “He’s come a long way – the young, angry player who transformed himself. And he’s still revolutionizing the game. Now he’s the oldest player in the Top 100.”

Asked what he was looking forward to see, Shankar exuded, “Just his backhand, man. I just want to see it in real life. That thing is phenomenal.”

Close by, Shannon Pham, 23, and her boyfriend were buying two souvenir Match for Africa T-shirts. Just another $70 to add to the couple’s weekend tab. They estimated that their trip would cost $1,200.

“I didn’t even think twice,” Pham said. “It’s on my bucket list, to see him in person. He posted a video on Facebook and right off the bat I was like, ‘OK, I’m going. I kind of splurged. I wanted to get as close as possible.”

Outside the arena there was a punk rock flea market, a man juggling swords, and T-shirts that reminded fans that the NBA’s Sonics were stolen from the Emerald City.  Inside the arena there was an evening of free-form fun and magic. The preliminary warm-up doubles match crackled with good humor. “Just put it in,” the joking Isner told his partner McCready. “He [Federer] isn’t that good.”

When Gates would stroke a volley winner, the crowd howled. How often do tech billionaires get such roars for a nice put-away? Never mind that, in Davis Cup play in 2012, Isner famously beat Roger on clay in Switzerland. Tonight the American giant was a kind of foil. Isner proved to be the Washington Generals of tennis – the fall guy to globetrotter Federer. He feigned confidence, saying, “I’m going to beat Roger 6-0, 6-0, ” but quickly got real as he admitted that the only way he could dent the Swiss was by hitting a winner each time. In an evening filled with the wave, kiss-cam video shots, a droopy net, booming Isner aces, wondrous Roger backhands and inspired winners, the 6′ 10″ Isner was reduced to leading “Let’s go, Roger!” chants.

Then came the moment of the night. Isner hit a splendid lob. Federer had no chance – but, what the heck, he ran it down and hit a tweener. Isner replied with a fine volley. The graceful Swiss caught it on the run. Then, in yet another moment of Federerian brilliance, he flicked a breathless backhand winner. “Shhh…Genius at work.”

The hapless Isner could only applaud his foe. He crossed to Roger’s side to give homage. Isner told the crowd, “The worst part of it was that Roger watched it on replay. He was adding injury to insult. I have to say that wasn’t the first time.”

But this was Federer’s first time in Seattle. He said he loved the city…that its mountains, lakes and forests reminded him of home. And this night reminded the awestruck throng what the sporting world has long known: Roger is an inspired athlete and a giving humanitarian.

After the match, he told Inside Tennis, “Tonight brought us one step closer to achieving our dreams. And achieving dreams for me and for the children is a big deal.” 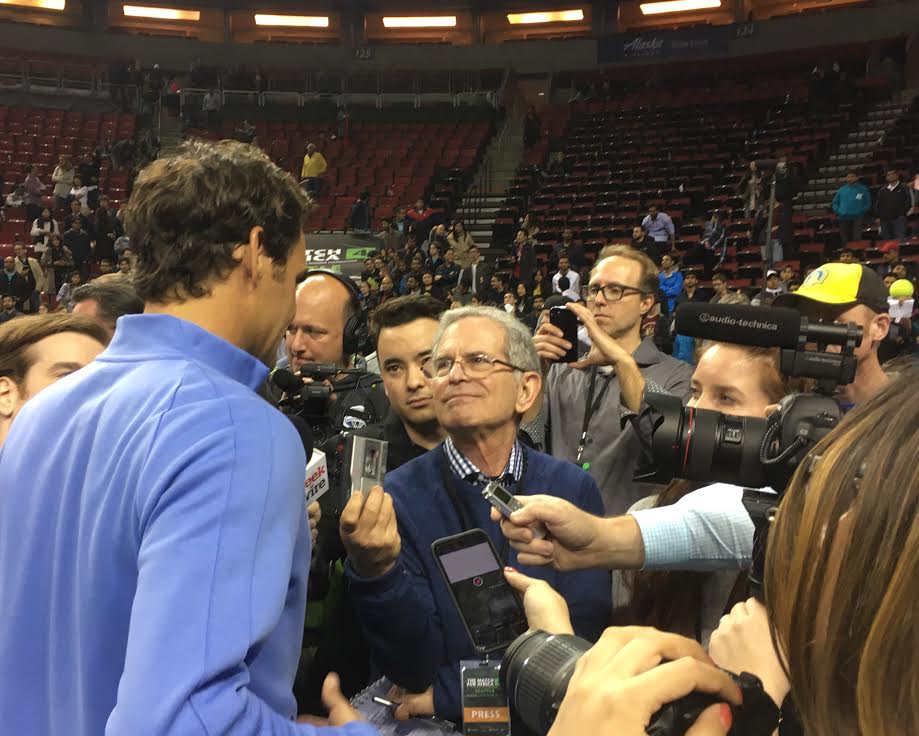