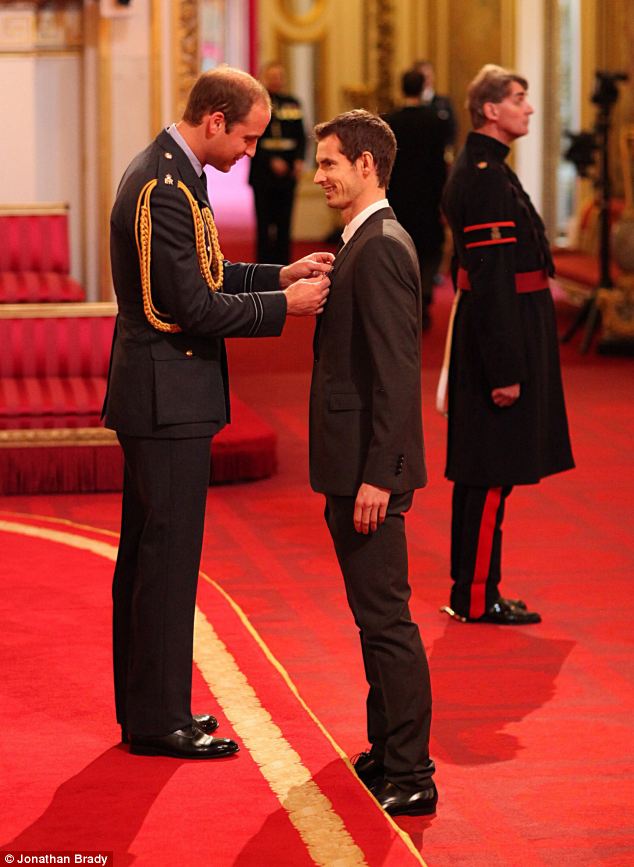 His words changed everything. After losing a heartbreaking Wimbledon final in 2012, Andy Murray was asked to say a few words. Shaken and heartbroken, he stepped forward and mumbled, “This isn’t going to be easy. But I’ll try.”

His moment of weepy vulnerability somehow transformed his world. To the public, the Scot was no longer a sullen kid without much to say or a perennial Wimbledon loser, in the mold of English punching bag Tim Henman. Less than a month later, on that same Wimbledon court, Andy would become the first Brit in 88 years to win an Olympic gold in tennis. And with the coming of a New Year, came a new honor. Andy Murray, was Knighted and is now Sir Andrew – not bad for a kid who only recently called himself an “absolute turnip.”

Young Murray had always seemed a bit out of his element. It wasn’t only that, as a fifth grader, he had survived a mass killing at his school, or as a teen had gone off to Spain to train and then endured his parents’ divorce. It wasn’t only that he was a Scottish island in a judgmental British sea (he was hammered when he once quipped that he would root for any soccer team except England). It wasn’t only that his every move was intensely scrutinized, or that, when it came to charisma, he was a bowl of soggy porridge compared to Roger’s and Rafa’s platters of sizzling steak and lobster.

More to the point, Andy too often came up short. While Roger’s, Rafa’s and Nole’s resumes boasted Slam wins in double digits, Andy had won “only” three. He was the fourth Beatle. Some even questioned whether he belonged in the Big Four. But seven years ago he rose to No. 2, and, like a stubborn North Sea cloud, he intermittently camped there for 76 weeks.

Then, like Scottish weather, there was a shift. In about a year and a half, Andy had recovered from back surgery, married, become a father, led Britain to its first Davis Cup title in 79 years, reached the Aussie and French Open finals, re-hired Ivan Lendl as his coach, won his second Wimbledon, collected another Olympic gold medal and become the first Open Era Brit to reach No. 1 – whew! One Brexit-inspired Murray headline shouted, “AT LAST, SOMETHING FOR THE WHOLE NATION TO CHEER.”

Plus, he displayed the most stunning off-court evolution of any player since Andre Agassi. Murray, once such an indrawn boy, evolved into one of tennis’ more outspoken men of conscience since Arthur Ashe. He bravely came out for Scottish independence, while opposing match-fixing, Sharapova’s drug cheating, sexist attitudes, and lesser pay for women. He hired a woman coach – Amelie Mauresmo. And no other top player has ever been as supportive of lower-ranked players in his own country as Murray, who backed cancer victim Ross Hutchins and many others. Just after his exhausting 2016 Wimbledon run, he traipsed to Serbia to be a Davis Cup cheerleader. “Apparently,” wrote Barry Flatman, “there is no stopping Murray and his bottomless pit of stamina.”

Yes, Andy has little of the grace of Federer, the magnetism of Nadal or the elastic fluidity of Djokovic. But he has an unmatched grit and perseverance.

He comes from a dank tennis outback with only a modest record of athletic excellence. So what? Murray’s every move is under an unkind telescope. Big deal. While others flow about a tennis court, Murray, with his tree trunk legs, seems to lumber. He’s stuck playing in the best era ever. And, oh yes, he has a ‘tude like no other.

The master of “the mumble tank,” Murray berates himself with doom-and-gloom rants and a turbulent stream of “the sky is falling” self-talk. He’s tennis’ champion of chirpers, who called himself an “absolute turnip.” Yes, Ilie Nastase could wring the civility out of any match. McEnroe raged against the world. But Murray gets livid with himself like no other athlete we’ve seen. Paul Annacone told us, “Andy’s got to lighten up on himself just a touch.”

Yes, Andy jokes with his pals, but you’d never call the complex Scot a light lad who’s comfy in his skin. His smiles are muted.

McEnroe, an expert on such matters, suggested, “There’s something in Andy that he uses to motivate himself. He is chippy. He has a bit of anger. He has something burning inside, it drives him on and gives him the strength to win.”

So do his backhand, his return of serve, his shotmaking versatility and his thoughtful court awareness, along with his drive, professionalism and willingness to sacrifice.

John Leicester noted that Murray, 29, was “the sailor who soldiered through storms that chased others back to harbor, the boxer repeatedly floored but never knocked out. He used the beatings he suffered from Federer, Nadal and Djokovic – losing 20 of the 25 times he played them at majors — as reasons to keep improving.”

After the 2016 US Open, with Federer and Nadal sidelined and Djokovic flatlining, Murray stepped up, locked in and went on a 24-match streak to win five hefty titles (including the year-end ATP Championships), as he became the second-oldest Open Era player to reach No. 1.

Once-dismissive Englishmen were now proclaiming, “Long live the king.” He was voted the best British athlete ever and now he’s a knight. But on hearing such accolades, Andy might well just shrug his shoulders, revive his most famous comment and mumble humbly, “This wasn’t easy, but I tried.”