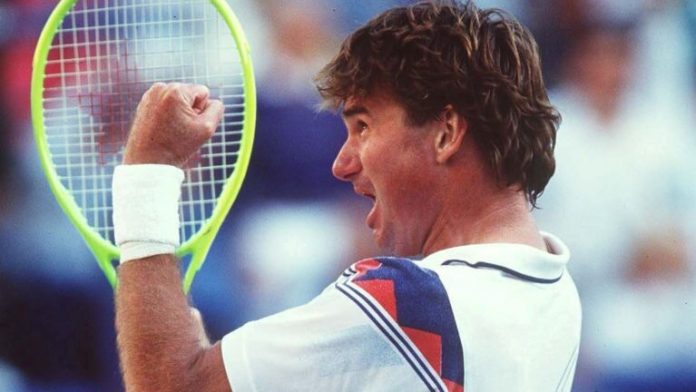 The French diva Suzanne Lenglen was so popular that Wimbledon had to move from its cozy Warpole Road digs to its current Church Road site. France’s swashbuckling Four Musketeers forced Parisian tennis bosses to construct Roland Garros. Bjorn Borg and Boris Becker popularized tennis in Europe in the ’70s and ’80s.

But it was James Scott Connors‘ 1991 New York tour de arrogance that transformed the US Open from a nice Labor Day tennis tournament into a bigger-than-life, in-your-face, must-see happening that draws hundreds of thousands of fans, big-bucks commercial backing, and dozens of dazzling celebs. Thanks in significant measure to Connors, the US Open is now a staple of the American sports calendar – a tough ticket. Can you spell s-i-z-z-l-e?

On the twenty-fifth anniversary of Connors’ feat, we recall Bruce Jenkins’ claim that, “Connors’ run to the semifinals remains the most rollicking, tempestuous, unforgettable episode in Grand Slam history…Connors crafted memories for a lifetime [and] the echoes still vibrate in the rafters of venerable Louis Armstrong Stadium.”

The run by the 39-year-old former No. 1 player proved to be a perfect showcase for the lovable rogue, the snarling, angry “me against the world” showman with his over-the-top swagger and an oversized chip on his shoulder – James Cagney in shorts.

Robin Finn noted, “The defending guardian of the tennis theater of the absurd, a beacon for all past-their-prime-time players…used mirrors, night magic, and his incredibly mean two-handed backhand to cut a defiant swath to the semifinals.”

Jimbo’s marquee moments are locked in memory. Coming off of wrist surgery, the No. 174-ranked wildcard and 5,000:1 pick was just ten points from a shock loss in the first round. But he rallied to score a five-set win over Pat McEnroe that ended at 1:35 a.m. In a moment of calm reflection, Jimmy offered this withering barrage to the virtually inert villain du jour, umpire David Littlefield, who had just issued an overrule: “Bullcrap. Get out of the chair. Get your ass out of the chair! You’re a bum! I’m out here playing my butt off at 39 years old and you’re doing that?”

Later he turned to Littlefield and offered this insightful sports analysis: “You’re an abortion.”

Years ago Jimmy had been a villain when he demolished poor little Ken Rosewall at Wimbledon and Forest Hills in 1974 and again when he sued Arthur Ashe in 1975. But he gained New York love when he won the US Open in 1982 and 1983. Now Frank Sinatra‘s Big Apple mantra, “If you can make it there, you can make it anywhere,” seemed to have been tailor-made for the brash baseliner. “What was truly yuckable,” wrote Curry Kirkpatrick, “is that Connors, tennis’ crotch-clutching, gutter-mouthed rude boy, had turned into an all-American hero.” “Jimmy Connors IS New York,” gushed Mayor David Dinkins. Time and again you’d swear Connors was a mid-town cabbie cursing a slow-moving truck from Jersey. “Kiss me before you do anything,” yelled the vein-bulging Jimbo. “Just kiss me!”

The raucous rebel from the wrong side of East St. Louis’ tracks stared into the courtside TV camera and spoke of the adoring throngs that so loved his act: “This is what they want – and this is what they’ll get.” Jimbo’s roundhouse fist-pumps became a symbol of his bravado. His never-give-up returns of four overheads from the overmatched Dutchman Paul Haarhuis became one of the most iconic exchanges in Open history. Bobby Riggs proclaimed that Jimbo had “the greatest fighting heart of any athlete I’ve ever seen.”

Yes, Jimmy fell to Stefan Edberg in the semis. Still, we were thrilled. “Connors,” claimed Sports Illustrated, “was all that tennis cared about.” What we remember is his quarterfinal comeback on his 39th birthday over the rather dumbfounded Aaron Krickstein. Yes, that’s THE match we’ve seen replayed ad nauseum on rainy days.

Clearly there was a new sheriff in town. Ilie Nastase noted, “What Jimmy has is what we all [would] kill for: one more time.”

What Sports Illustrated called a “kaleidoscope of chaos” soon became one of tennis’ few 15-minutes-of-fame episodes. TV crews were following Connors up Park Avenue chatting away with his pal Vitas Gerulaitis. He was on Nightline. Newsweek magazine put him on its cover.

“We can’t understand what’s going on in the Soviet Union,” said author Roger Rosenblatt, “but we can understand Jimmy.” The New York Times contended that Connors was “absolutely available to any kind of emotional baggage we bring to him.”

Robert Lipsyte captured the sheer, vain and totally shameless delight of Jimbo’s cocky, operatic performance. In one of our favorite tennis observations, the writer suggested that Connors, “reminds us all how much we have given up by growing up. Lucky Jimmy. If only we could once again stop the party in the living room, make all the grownups applaud our naughty words, dance through the hors d’oeuvres, posture and preen and be a terrible two, the only time when a human being will be loved for conquering the world while crying.”