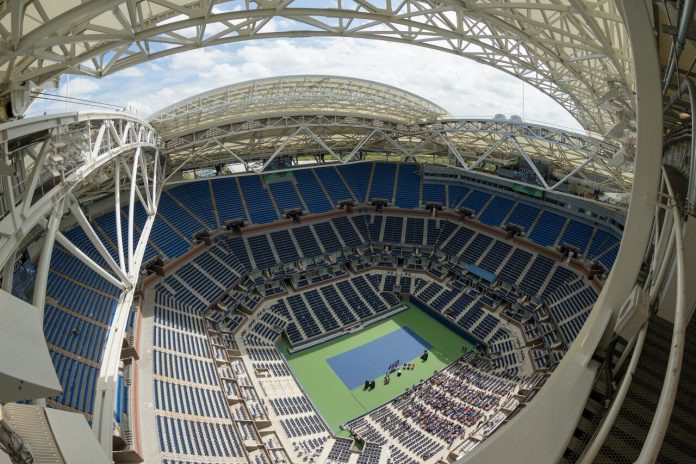 SOUND CHECK: Raucous Arthur Ashe Stadium will now be even louder thanks to its new roof. But the US Open will also be quieter too – grunt-meister Maria Sharapova is still suspended and Vika Azarenka has withdrawn because of her pregnancy.

WHAT’S WRONG WITH THIS GUY? According to Simon Hattenstone, years ago young Mirka Vavrinec went to a local club to see an emerging phenom. The Swiss boy was said to be the future of tennis and eventually became her husband. But what she saw was a surly teen, shouting and flinging his racket. According to Roger, she then quipped, “Great player – he seems really good! [But] what’s wrong with this guy?’”

WHAT DO BIG BAND ENSEMBLES, EPISCOPAL CHURCH SERVICES AND STATE OF THE UNION ADDRESSES HAVE IN COMMON WITH ANDY MURRAY’S FRIENDS BOX? They all feature folks who stand up, sit down, then rise up again in ritualistic patterns.

JIMMY HOFFA IS ALIVE AND WELL: Jon Wertheim coined the best nickname of the summer. He dubbed Dominic Thiem “The Thiem-ster.” Not to belabor the point, but allow us to note that the 22-year-old kept on trucking for a good while. He won four tournaments this year and reached No. 8 before being sidelined by an injury.

THREE TITLES, THREE NICKNAMES, THREE WOMEN, THREE WORDS, THREE SUNDAYS: Djokovic is again hoping to win three Slams in a year…There have been three different winners in the first three women’s Slams in 2016… When asked to describe Nick Kyrgios in three words, Dustin Brown said, “Talented, crazy and nice”…Stan Wawrinka has three nicknames: Stan the Man, The Bison and Stanimal…On Sunday, July 10, Brits Andy Murray and Heather Watson won Wimbledon titles. The next Sunday, Britain beat Serbia in Davis Cup play in Belgrade, and the Sunday after that Jo Konta became the Bank of the West champion and then proclaimed, “Yay! God Save the Queen.”

SAY IT ISN’T SO: As a kid, Federer was kicked out of practices for bad behavior…Three of the five biggest names in tennis – Federer, Nadal and Sharapova – collectively have missed or withdrawn from seven Slams this year…Venus and Serena‘s father Richard Williams, 74, suffered a stroke…Venus tied Arantxa Sanchez Vicario‘s record for most Olympics played by a woman tennis player: 5. But then she suffered painful first-round losses in both singles and doubles…A sick Jack Sock lost his first round Olympic match to Japan’s Taro Daniel, ranked No. 118.

THE GHOST OF MARK TWAIN: When rumors spread that Mark Twain had died, he famously claimed, “Reports of my death have been greatly exaggerated.” After it was said that Francesca Schiavone had retired, the Italian said they “announced my retirement, but I didn’t. So you can all stand up and go back to work…I will announce when I want to stop.”

GO FIGURE: 6’10” John Isner beat 6’11” Reilly Opelka in the Atlanta semis…Federer has heard retirement talk for seven years…Goran Ivanisevic will now coach Tomas Berdych…This summer Yulia Putintseva, who is no relation to the Russian political boss, was said to have “played with the cold-eyed steel of the macho president.”

HEADLINE OF THE MONTH: FEDERER’S AGENT: THERE IS NO DOOM AND GLOOM IN OUR CAMP.

NOW HAIR THIS: Madison Keys confided, “I have a ridiculous amount of hair products. Between shampoo, conditioner, hair mask, like leave-in conditioner, hair spray, bobby pins, there’s a lot of toiletries in my bag every tournament”…BTW: Is Boris Becker‘s florescent hair tennis’ answer to Donald Trump?

THE CEO OF RAONIC TENNIS: A reporter confronted Milos Raonic, bravely reminding the Canadian that he had three coaches and that can be a lot of voices for a chef to sort out. Raonic replied, don’t worry, “I am the CEO of Milos Raonic tennis.”

DEEPEST INSIGHT OF THE SUMMER: Christopher Clarey reminded us that Indian Wells owner Larry Ellison is “a man with pockets deeper than the Mariana Trench,” and Scott Ostler argued that the Olympics should bypass its many problems by having Ellison permanently host the games on Lanai, the Hawaiian island he owns.

JUST WONDERING: Will the US Open feature a Djokovic vs. Murray Slam final for the eighth time…After Serena, who has the best serve in the WTA – Madison Keys, Venus Williams or Coco Vandeweghe?

MOST USELESS TV DEBATE: Whether it takes a linesperson one second or .87 seconds to duck to avoid getting hit by an Isner serve.