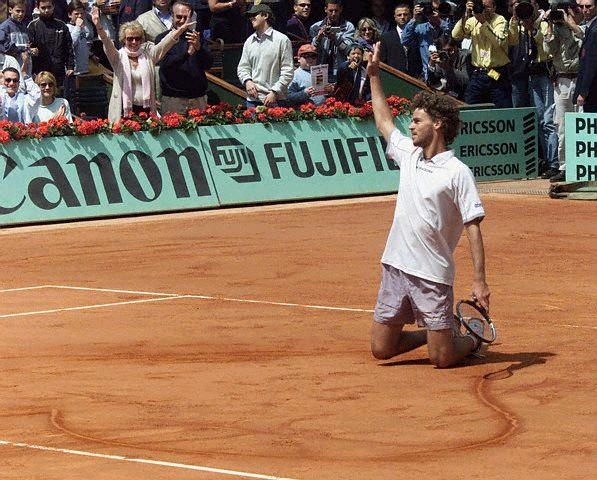 We thought we might profile the singular Brazilian Guga Kuerten. After all, the Olympics are coming to his country and he was just named an ambassador for the International Tennis Hall of Fame.

But we weren’t sure. Then, just after Novak Djokovic won the French Open, he took his Head racket and drew a heart in the Roland Garros dirt to recreate perhaps the most inventive celebration in tennis history, which had been created by Kuerten. Now, there was no question. So here’s Guga’s heartfelt story.

If young Andre Agassi – as Ivan Lendl insisted – was “a haircut and a forehand,” Brazilian Guga Kuerten was “a backhand and a heart.”

Many have played this game with passion and love, but none more so than this giving, wise South American.

France’s Yannick Noah once told me that Guga “has this look in his eyes. There’s love there. It’s almost religious. He’s not like, ‘I win, I’m the best.’ It’s not an ego trip. It’s ‘Oh my God, I won. I’m so happy for my people.’”

When the ATP started to “glam” up his personality in a PR campaign, Kuerten bristled, saying, “I don’t want to be promoted. I’m already too much promoted. I want to be unknown.”

Powered by a sublime, one-handed backhand, Kuerten became No. 1, was a Davis Cup hero, and earned over $14 million. But it wasn’t an easy journey. His beloved father had a heart attack on-court as he umpired a junior match, and died. Guga was eight. His brother Guilherme suffered oxygen deprivation at birth and endured serious mental retardation. Guga promptly took up his cause and gave him all the trophies he won, but Guilherme died way too young. It was hard enough for someone to emerge out of Brazil to become a Hall of Fame player. But Kuerten wasn’t even from Rio or Sao Paulo. He emerged out of the southern provincial city of Florianopolis. When the city eventually hosted the Davis Cup, Reuters noted that the makeshift stadium there “was surrounded by a sea of mud, puddles of filthy brown water and piles of stone…The smell of rotting fruit pervaded the air.” How sad.

But Kuerten’s career was sweet. He won 20 tournaments and is the only player to have ever beaten Pete Sampras and Andre Agassi in the same major tournament. He and Guillermo Vilas are the only South American men to ever win three majors.

Over the years, millions were delighted by the beauty of his elastic game. Mary Carillo said Kuerten never “lost any of the surfer-dudeosity he showed up with…[He’s] a human Slinky…his backswing starts in Kentucky and ends in Ohio.”

Still, he is most remembered for his 2001 French Open win over the modest American journeyman Michael Russell in one of tennis’ most storied fourth round matches. Considered that year to be the favorite to win his third Roland Garros title, Guga came out and stunk up the gym for two hours. Finally, he found his game and managed to pull out a thrilling win.

On occasions like this, players often fall to their knees, or kiss the court or (at Wimbledon) nibble a blade or two of grass. On that Parisian day, the ecstatic Brazilian drew a big heart in the clay and collapsed, flat out on his back and into the heart.

But Guga drawing an on-court heart and collapsing on his back within it was one of the best celebrations ever – a moment of high tennis theater. At this year’s French Open, the Brazilian told reporters that the win was “the most emotional I’ve had in my whole life…It would be the one I would choose to take with me [to heaven]. The heart was for the people cheering. I felt I was in the heart of the 12,000-14,000 people. You cannot plan to have these kinds of things.”

One thing the sports world has long been planning is to descend in August on Guga’s homeland for the Olympics. He explained why the games mean so much for Brazilians. “Our passion is for our sports, we are very sentimental. You can see great beauty in our country and [the Olympics] are an opportunity…to have your emotions go deep, to connect with the people…When I got in touch with my deepest feelings, I was able to become a better player…You go in Rio at three in the morning and people are playing soccer and volleyball – they love to be surrounded by sports. We want people to learn more from Brazil. In sports we are a little fanatical. To win is great, to lose is terrible. It’s a little bit too limited for us. I hope we can go deeper. The best kids from around the world, 10,000, will come knowing that only a few will go back with gold and the rest are [seen as] terrible. That’s not fair, to spend 25 years to become second. We can all learn a lot from the Olympics and the special flavor of the Brazilian soul. We love this atmosphere – warm and vibrating. It will be very noisy and also there will be happiness. It’s not usual.”

What is usual for Guga is his love of tennis in general and the French Open in particular. Roland Garros was the first tournament he ever saw. He recalls, “When I first came here at 20, I thought I would be done [with tennis] at 24, and surfing around the world. But my first day had a huge impact on the rest of my life. After that, I knew what tennis was all about. I kept searching…[But] my life happened here [in Paris], my success happened here. For me, it’s sacred…When I am here, I feel I am a better person.”

Guga speaks of tennis almost as if it were a religion. “Every day tennis continues my great passion…By this sport I became who I am…All I have happened is due to tennis. Tennis gave me the power to be who I am. The fantastic part of tennis is to prove yourself every single day, bring people together and make connections with billions of people in the world…Tennis is a way of understanding history…I believe in hope and history…Without history there is no future.”

“Tennis,” suggests Kuerten, “is a great way of living. It’s a way of discovering in yourself a way of beauty – I like that.”