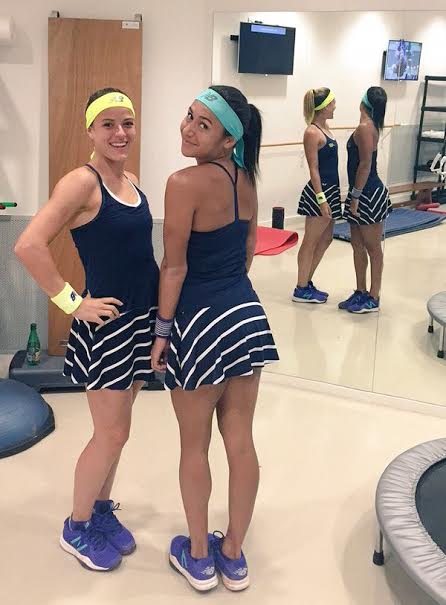 PARIS—Author Lee Child wrote that when “you hear hoofbeats, you look for horses, not zebras.” Similarly, when you look for tennis outfits, you look for a certain benign blandness. Pastels and even bright neons are accepted, but stampeding zebra stripes that scream “Here I am” test the limits.

In Paris these days, it seems like the French Open is off on a safari all its own. There are zebras – well, Adidas zebra outfits everywhere – tops and dresses, skirts and leggings and even shoes that are being worn unashamedly by men and women, stars and wannabes, quiet ushers and cheering fans. What did Paris ever do to zebras to deserve this kind of revenge of the striped beasts? I guess it’s Federer’s fault. He fails to show up in town and all civility goes out the window.

Zebras themselves, were they that self-aware, could trace their history back some four million years to wild horses, and it seems it’s almost been that long that zebras have drawn our attention. Folks long ago wanted to domesticate them. Nice try, but that sure didn’t work. Some creatures, God bless ’em, are a tad too wild. Then folks wanted to make zebras beasts of burden. Sorry pal, your mule will have to do. Zebras like their zeal (i.e. their herd), still they are free spirits. Good for them.

Now, as Adidas floods the French Open with their striking, impossible-to-miss zebra outfits and leggings and black fluffy skirts and even zebra shoes, questions abound. Is much of the world correct in calling them “zeab-bras” or are we provincial Americans right in saying “zee-bras?” Most important, is that eternal question – are zebras black with white stripes or white with black stripes? Actually, they are black beasts with white stripes and that’s for sure – final answer.

The New York Times’ Vanessa Friedman tells us that in World War II, zebra designs were used by the Navy on their ships to distort the vision of the enemy. I can just hear the commander of a German cruiser desperately crying out, “Quick, get Tarzan up here onto the bridge. We’re being attacked by a wild herd of American zebras.” In a more contemporary mode, Friedman said the outfits made players look like “refugees from some ’70s disco party.” Maybe Donald Trump should build a wall in Paris too.
In any case, the zebra gear, which has had more impact then any other corporate designer look in history, drew endless comments. “It’s like Angelique Kerber is looking to get lost in a drazzle of zebras,” said broadcaster Craig Gabriel. Others said the look was hideous or garish or like a Soolander outfit. And then there were rather tedious laundry debates. Should your zebra dress (which has a bold red stripe on the back and goes for $135 at the Roland Garros gift store) be washed with your whites or your darks, or these days is it irrelevant?

Most of all, tennis fashionistas want to know whether the zebras’ Parisian takeover will spark a war. Will Adidas’ brilliant move induce Nike, Fila, ASICS or Eleven to retaliate? The answer may not be a matter of black and white. Tennis could find itself with a full-out fashion war on its hands, or maybe it will just be some sort of a tame animal parade.