THIS JUST IN: Roger Federer told ESPN, “I won’t be around for the next 100 years.”

THE TONY BENNETT INTERVIEW: Whether they are rappers or rockers, whether they are Hollywood royalty or British royalty, celebrities adore coming to the US Open. President Clinton has come to the Open a couple of times. Jimmy Carter came by, as did George Bush I. But the second President Bush and Ronald Reagan never came. Neither has President Obama. The First Lady was here a couple of years ago. Her security was even more intense than Fergie’s – the once popular English princess. Donald Trump hadn’t come to the Open for a while, perhaps because he’d been booed when he appeared on the Diamond Vision. Now a presidential candidate, Trump appeared again this year. But he was booed far more intensely than in the past – a deafening howl. Ouch.

Billie Jean King – who is celebrated three or four times per Open – consistently draws hearty cheers. She’s beloved, and knows how to work it. Joe Torre, when he was the New York Yankee manager, would drew huge applause, and last night the throng loved Oprah (even though she didn’t give anyone in the crowd a Pontiac). This year comedian Aziz Anzari got a huge ovation, and Jimmy Fallon and Justin Timberlake (who together offered a nifty dance) and Kim Kardashian were all on hand.  Some celebs appear at the Open just for a nice night out or to get some good publicity. Others are tennis nuts, like Gladys Knight, Aretha Franklin and the late Wilt Chamberlain. No celeb was more committed to the game than the late comedian Allan King. And singer Tony Bennett also loves the game. We’ve long wanted to talk to the crooner. Here’s our conversation:

You love tennis so much, why such passion for the game?

Of all the sports, I consider it [to be] the best. It’s the best game of all of them.

It has grace and power?

You’re known for the beauty of your voice, and its grace and ease. Do you see that in Roger Federer and his game?

I love everything he does. I even love it when he loses.

Because he plays with such beauty?

With class and with quality – it’s the right way to play.

What are some of your first memories of tennis?

I’ve always loved it. It’s my favorite sport. I’ve caught every game here [at the BJK National Tennis Center] since it opened.

I imagine you’ve seen them all – Borg and McEnroe and Connors and Navratilova – who is your favorite?

Well, they’re all fabulous, but my main man is Federer.

You’re also known for your longevity, and at 34, Roger, too, is continually reinventing himself – just like you.

If there’s a woman tennis player you’d like to sit down and have dinner with, who would you like to chat with?

Chris Evert. I love watching her.

What about your game? What kind of game did you play?

I don’t play anymore because I’m 89, but it’s my favorite game to watch.

I’m from San Francisco, so I just have to ask you – what’s so special about the city? You sang so beautifully about it.

There’s a song called “I Left My Heart in San Francisco,” and it’s very special.

What’s the origin of that song?

[The late] Ralph Sharon, my music director, is the one who found it. He gave it to me and it became my major song.

GIVING NEW MEANING TO THE PHRASE SABER-RATTLING: SABR, which stands for Sneak Attack by Roger – is the innovative net charging tactic of the year. Even his fellow Swiss Stan Wawrinka is doing it.

GO FIGURE: Each time Serena beats Venus at the Open, she goes on to win the tourney. This year, when Stan Wawrinka goes through an embarrassing personal hassle about his love life before a Slam, he wins.

EURO DUOS: For the first time in Open history, two Italian women – Flavia Pennetta and Roberta Vinci – reached the semis of a Grand Slam. The Swiss tandem of Federer and Wawrinka are also in the semis.

NO WAY: After all the hype, glitz and tension of Serena’s quarter against Venus, could her semi against Roberta Vinci be a trap match? The No. 42 Vinci has won five doubles Grand Slams. Then again, Serena has an impressive 4-0 record against her in singles.

MAKES SENSE: Steffi (whoops, we should call her Stephanie) Graf is inward and shy. She shuns the spotlight and is almost a recluse. Still, wouldn’t it be grand if she came to New York to present the women’s trophy to the winner, who could quite possibly be Serena, tying the record of 22 Open era majors held by the German?

MIGHTY MARATHONS Nick McCarvel noted that for the first time since 1982 all four women’s quarterfinals went to three sets.

SELF-PUNISHING: Why does Simona Halep whack herself so often in the leg?

PROUD OF AUNT VIKA: After Victoria Azarenka fell to Simona Halep in the semis, she said she would now have the delight of picking her nephew up after his kindergarten session. When asked if the kid knew she was a star, she said, “I hope he just is proud that I’m Aunt Vika, regardless of the rest of the stuff.”

A TALE OF TWO ATHLETES: Peter Bodo has said that the distinction between Venus and Serena is “almost like a high jumper and a heavyweight.”

SOUTHERN CALIFORNIA DOUBLES: The No. 1 doubles seeds, the Bryan brothers, were upset in the first round. But that doesn’t mean Southern California teams aren’t making noise in New York.

USC-bound Brandon Holt, the son of Tracy Austin, and his partner Riley Smith, won their third match in the US Open junior doubles over the No. 6 seeds. Austin said seeing her son win tonight was better than her winning the tourney. USC grad Steve Johnson and his fellow Californian Sam Querrey are into the men’s doubles semis.

“They are the reason I retired.” – Mary Jo Fernandez on the Williams sisters

“Thinking of what could have happened is pointless.” – Victoria Azarenka, who lost in the quarters today.

“I can’t imagine playing my sister, if I had a sister.” – Sam Stosur

“I think my success is our success…We all started together and we are still together.” – Serena Williams

“I’ll always be the older sister. That will never change.”  – Venus Williams 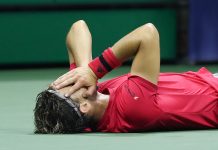 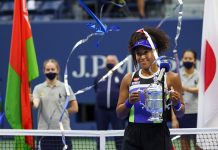