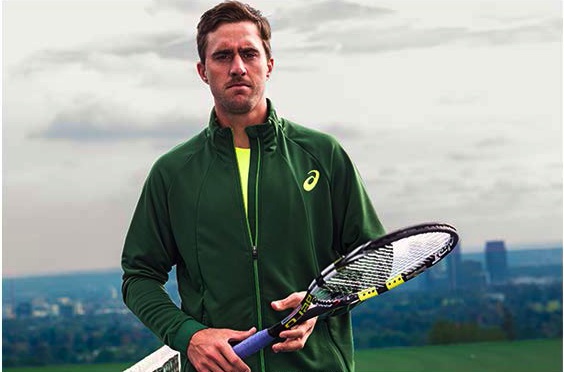 USC coach Peter Smith was worried. He cautioned his new recruit, a freshman from Orange County, that he might not be able to make it past the team’s first practice.

Wrong. Steve Johnson, who first picked up a racket when he was two, went on to lead USC to four straight NCAA championships, win two individual NCAA crowns, and 72 straight matches.

Next up for Steve was lighting up the circuit—no big deal. The leader of the greatest college dynasty ever was about to rock the ATP.

But Steve was in for a shock—a douse of cold water. Never mind the men of Troy—the college boy who dominated campus battles was put in his place by the men of the ATP Tour. The crushing losses were unrelenting. “Welcome to the real world, Rook,” the grizzled pros seemed to say.

For all its glitzy allure, at its core, pro tennis is a brutal reality. Just win, baby. It’s totally Darwinian—survival of the fittest is its unrelenting engine. Unless you’re a phenom, you’d better get grinding.

Johnson grinded. The setbacks continued. “I took the losses pretty hard,” Johnson told ESPN.com. “Every time I would lose, it would be such a shock to the system. Mentally … [it] got to me.”

So, did Johnson win too much at USC? Steve confided to Nick McCarvel, “I didn’t lose much in college, so to lose every week, it sucked … I thought, ‘Maybe I’m not ready. Maybe this isn’t for me. Maybe I peaked in college. All of these crept into my head.'” His then-coach, Craig Boynton, conceded that Johnson didn’t “know how to lose. In the pros you will lose just about each week.”

Plus, the suddenly nomadic Johnson missed his friends and parents. (Coach Smith called Steve’s math professor mom and tennis teaching pro dad “the two most solid parents I’ve ever been around.”) But Steve had had it. So, one night he called home and tearfully told his beloved father Steve, “I’m just not good enough.” But his Dad—a tennis whiz who has taught for over three decades—stood firm. “Just hang in there,” he advised. So Johnson trudged on, continuing his often agonizing quest, and has been on the rise ever since. He beat both Aussie Open finalist Marcos Baghdatis and giant Kevin Anderson in one heady day in New Zealand. And he won Challengers in Aptos, Auckland and Guadeloupe.

Sure, analysts noted that his serve wasn’t as big as John Isner’s. His forehand wasn’t as massive as Jack Sock’s. He wasn’t as quick as Donald Young, nor was he as charismatic as Andy Roddick.

So what? Wise, young, no-frills Johnson attained a superb self-awareness. He knew his sport—he knew his game. Level-headed, composed, and relishing a certain new resilience, a product of the ATP school of hard knocks, he now speaks of wanting to play aggressively while staying within himself, of executing his own skill sets, of upgrading his weaker backhand side and using the right mentality and the right goals to his advantage. “From a player’s and coach’s view,” says Paul Annacone, “he should be your model. He knows how to be professional. He takes what he has, maximizes it, and tries to get better.” And Annacone has coached a couple of fairly professional players: Sampras and Federer.

In the past four seasons, Johnson has improved with a dogged consistency, and last year his ranking leapt 120 spots. He’s beaten John Isner, Ernests Gulbis and Tommy Haas, and when he reached the third round of this year’s Aussie Open, there was talk of the greatest team player in college history being named to our Davis Cup team. But his results flatlined a bit, and his ranking dipped from a career high of 37 to 54. Still, fans noted his considerable assets: the strong serve he uses to set up his foes, his penetrating forehand and his all-business fighting skills.

He’s not only learned how to manage losses—he’s learned how to win, and has settled into the top 60. No wonder—at the Aussie Open, when The Mighty Fed passed by the Californian, he greeted Johnson, saying, “Heeey, Stevie J.” Not bad for a kid who five years ago was ranked No. 636 and started sports by bopping beach balls with his Dad.

These days Johnson wins the matches he’s supposed to. Already this year he has 15 wins, and nine of the last 11 players he’s lost to have been in the top 30.

Yes, questions remain. Does he have the game to break into the top 20? Will he make the Davis Cup team? Still, there can be no doubt that Stevie J is one mighty Trojan warrior.

You must watch this video: Write My Essay