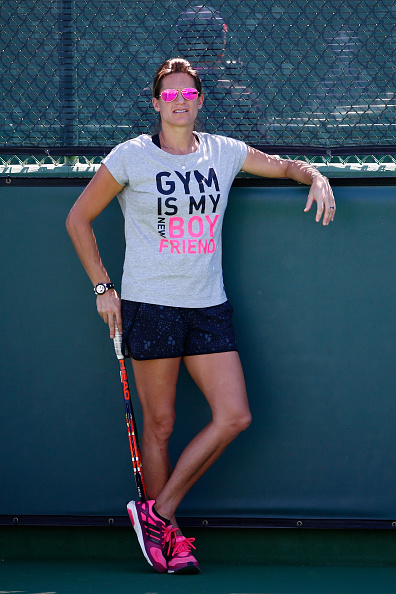 THIRD STADIUM FOR INDIAN WELLS: The Indian Wells Tennis Garden—site of the BNP Paribas Open—is by far the best tennis facility in the world. And according to sources, look for the palatial site to add a third stand-alone stadium, Court 3, on the site of the current temporary Stadium 3. The new venue reportedly will be under 8,000 seats and will feature (of course) a restaurant, as well as a museum that could become a huge fan favorite.

PRESS ROOM DIALOG OF THE DAY: A press handler approached two well-traveled journalists in the media center and asked, “What are you two gentleman talking about? Such a wealth of experience.” One of the reporters replied, “Experience yes, wealth no.”

T-SHIRT OF THE TOURNEY: Amelie Mauresmo‘s message: “Gym is my new boyfriend.”

FIGHTING WORDS: When referring to the ITF’s claim that Davis Cup play is a success, Rafa Nadal said, “It’s a lie.”

• Mary Carillo jokingly asked Lindsay Davenport whether she was going to give her pupil Madison Keys illegal signals from her seat. During Madison’s first match, when Davenport went down on court, she was greeted by applause.

• Aga Radwanska, who is coached by Martina Navratilova, was asked, “Murray is also coached by a woman. Is that good for humanity?”

• Radwanska was also asked, “What is the best part of being coached by Martina, and what is the worst part? Is she annoying?

CAUTION—PETKOVIC’S COOKING MAY BE DANGEROUS TO YOUR HEALTH: A while ago, German Andrea Petkovic tweeted, “I am cooking and it’s amazing and everybody’s excited and we will all die soon and probably maybe for certain.”

HER MARTIN LUTHER KING MOMENT: A few weeks ago, WTA chief Stacey Allaster told Serena that the day when she returned to Indian Wells after 14 years would be her “Martin Luther King moment.”

REFLECTION ON A TRAGEDY: Simona Halep dedicated her first victory at this year’s BNP Paribas Open to a cousin who recently committed suicide in Constanta, Romania. She said the suicide was a tragedy, but it was best for her play Indian Wells.

LOOK WHAT’S IN ROGER’S REAR VIEW MIRROR: Federer said that if Rafa “wins the French Open a few more times, and I don’t win anymore, then clearly he can catch me very quickly.”

QUOTE OF THE TOURNEY SO FAR: After the first match of her return to Indian Wells, Serena said, “I feel like I have already won the tournament.”

THAT’S A LOT OF TEARS: Madison Keys said that when Serena stepped back onto the court on Friday night, “half the crowd was probably crying.”

GATEWAY REALITY SHOW: Madison Keys said that Sam Querrey thought being on the reality show Millionaire Matchmaker was “a gateway into The Bachelor … which is his lifelong dream. He was all excited about it.”

FISH ARE JUMPING: The feel-good story on the men’s side of the Indian Wells tourney is the return, after 18 months, of Mardy Fish. Fish said he didn’t recognize 30% of the players in the locker room.

BEST FISH JOKE: John Isner said that his new sponsors at Bass Pro Shops “have a lot of hook-ups.”

MR. PERFECT: Roger Federer plays tennis with more grace and success than any other human being in history. As the father of two sets of twins, it’s also said that he even reproduces better than the rest of us. Now, Federer told the New York Times that despite sometimes bothersome back problems, last year he didn’t get any shots, confiding, “I was just praying I didn’t have to take it … [I have] never had to take a shot in my life.”

GO FIGURE: Spaniard David Ferrer won two titles in two weeks, and Federer and Nadal won titles in the same week … Practice sessions at Indian Wells draw a lot more fans then many matches on the circuit … Four former women’s No. 1 players were on outer courts on the first Saturday.

NOVAK’S DESERT VACATION: New dad Novak Djokovic, who has his wife, his son, two dogs and assorted coaches and handlers with him in the desert, said he felt that talking to the press was like a vacation and that his dogs are like his children.