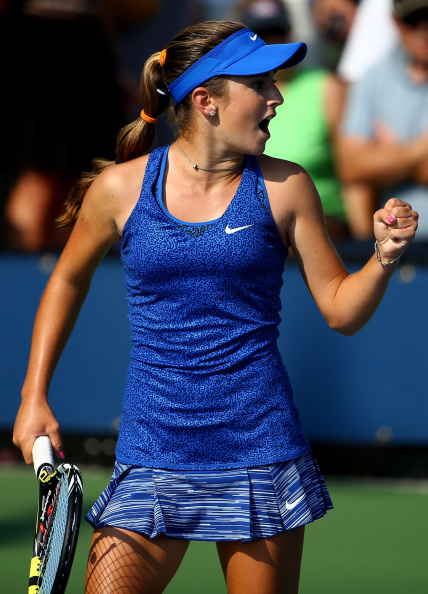 It’s a cliché: “A star is born,” exalt the dream makers.

On second thought, no, let’s not succumb to hype and burden another young player with legendary expectations.

But make no mistake: Today, CiCi Bellis—so young, so fit, so focused, and so very fearless—captivated an ecstatic US Open crowd that packed into the recently upgraded Court 6, just outside Arthur Ashe Stadium.

“She’s as tough as nails,” said one fan.

“She’s so good! That was amazing—incredible!” exclaimed a trio of stunned fans from Boston.

Yes, lest we forget, Catherine “CiCi” Bellis has delivered perhaps the biggest triumph by a Northern California player since Brad Gilbert was “winning ugly.”

Of course, Bellis doesn’t win ugly. She wins with some grace, and her last name is oh-so-close to the Italian word for beauty.

And Bellis wins big. To take the champion’s trophy at the Mountain View Open at 14, she downed many a seasoned adult player. Last year, she also claimed her second Easter bowl title, as well as the prestigious Les Petits Ans international junior tournament in France. And Bellis—the product of a family which first came to San Francisco in 1851—helped Northern California to win the Maze Cup over uber-power Southern California for the first time in 28 years.

Earlier this summer, Bellis even tamed a fierce force of nature—that would be last year’s US Open girls finalist, Tornado Alicia Black—to win the coveted US Girls’ 18s championship in San Diego. In the process, Bellis—now 15—became the youngest girls national hard court champ since Lindsay Davenport in 1992.

Yet all of this was merely an anonymous prelude for today.

Here, in her first-ever Slam match, on the biggest stage in tennis, in New York, f—— New York, with its hefty heat and deafening fanatics, Bellis beat the tournament’s No. 12 seed Dominika Cibulkova, 6-1, 4-6, 6-4. Cibulkova is a reigning Grand Slam finalist, having reached the Aussie Open women’s final in January. She’s ranked No. 13 in the world, while Bellis is ranked outside of the top 1200.

Still, Bellis, who hails from wealthy Atherton, California, has a resume that is already rich with wins.

From France and Milan to Mountain View and San Diego, she loves to compete. Yes, her nickname is CiCi, but the personable and level-headed 15-year-old scores an A+ in inner fire.

With technically sound, dynamic shot making and a calm focus beyond her years, she took down the seasoned Slovakian Cibulkova as if she was out for a hit at Cuesta Park. Visibly sharper than her veteran opponent during the warmup, she came out blazing, winning the first eight points of the match and dominating pivotal later moments with aces and winners.

Still, winning in the Big Apple is no cakewalk.

Afterward, reporters swarmed and dream makers began scheming. A player handler in the Ashe Stadium hallways asked Bellis how the moment felt—”Unbelievable,” she answered—and then warned her with a laugh not to go outside on the grounds. Meanwhile, sages breathlessly asked the Lords of Player Development, “Is she our best young prospect?”

“She likes to play,” remarked an understated Jose Higueras. “She embraces the pressure and the crowd, and that’s good.”

And both the crowd and the media embraced the 15 year old. They know how to do that. They did it last year with the Haitian wonder child Vicky Duval, and they did it big time in 2009, when 17-year-old Melanie Oudin waltzed past a cadre of imposing Russians that included Ms. Maria Sharapova. “She’s just always in the right place at the right time,” Chris Evert remarked during Bellis’s victory. “Wow—charisma, and composure that goes with a big game.”

One has to look back to 1996, three years before Bellis was even born, to find a younger player who’d won a round at the US Open. (The name of that player? Anna Kournikova.)

Bellis was virtually unknown this morning, but now no detail about her was too small or trivial.

“What does it feel like, CiCi?” one reporter asked..

“Words can’t describe it,” she replied.

“Did you surprise yourself?”

“You beat Tornado a few weeks ago. Is this more of a storm?”

“For sure, yeah,” said the poised kid.

We soon learned that CiCi likes to text, and use Instagram, Snapchat, and WhatsApp. She’s also (unlike Genie Bouchard) outgrown Justin Bieber. As for the talk show CiCi would most like to be on, that would be Ellen. And yes, CiCi’s friends were tweeting “#TakeDownCibulkova” before the match, which the Californian—who has been training under Jelena Pandzic, and also under the USTA’s Leonardo Azevedo in Carson—did with a certain ruthless abandon. Her forehand punished. She came from behind. She hit second-serve aces and closed the match confidently, with barely a blink.

The proud little lioness Cibulkova left the court in a stunned humph, eager to privately lick her ample wounds, while that CiCi kid who rocked the Big Apple left many onlookers in a daze. Longtime cynics cautioned us, “Not so fast—we’ll ‘see see’ about CiCi,” while hardened New Yorkers joyously sang an appropriate victory ditty adapted from the old blues and rock classic “See See Rider”: