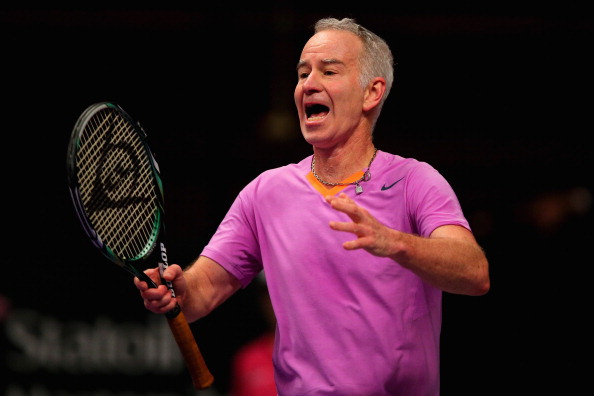 Everybody knows that, this side of Indian Wells, California tennis is hurting.

So it was kind of a feel-good, every-cloud-actually-does-have-a-silver-lining event when Jim Courier’s barnstorming senior circuit, the PowerShares Series, moseyed into Sacramento’s (kind of sleepy) Sleep Train Arena for a one-night stand featuring boss Courier, with his inside-out forehand; Pete Sampras, with his beautiful serve and a not-so-beautiful bum shoulder; and James Blake, who still has his howitzer forehand and an ATP ranking.

But, truth be told, when John McEnore is on hand, he is the volatile straw that stirs the aging milkshake.

He doesn’t stroke forehands with a lovely country club arc. He kind of shoves them: lots of will, not too much Federerian grace. Still, fans love (or love to hate) sports’ quintessential artist. Never mind that this gray lion is older than grandpa (he’s 55). He flicks beautiful lobs, and knifes convincing volleys. His corkscrew serve still uncoils with power. Caution: even old codgers can bite. When it comes to touch, no one touches Mac. But—can we be candid here?—like NASCAR fans want to see crashes, or hockey fans crave fights, many a fan comes to senior tennis to revel in a McEnore meltdown. So, in Sacramento, we saw John “Still Wound Up After All These Years” McEnroe being John McEnroe. You know the gestalt: sky-is-falling complaints, woe-is-me protests, rackets flung, and that menacing world-class sneer. Don’t ya love it?

McEnroe’s ferocity may not be white-hot like it once was, but it still burns. Goodness, the man was complaining before the first ball was struck. When he tells ticket holders to be quiet, they respond by calling out “Play tennis!” or they relish giving him a taste of his own sarcastic medicine: “You cannot be serious!” yells more than one fan.

McEnroe is funny. When an annoying, drone-like buzz drifts down from the arena’s rafters, he mumbles, “Are they done with the carpet cleaning up there? I know this building is old, but please.” And Mac is good, very good. He’s the best senior player in history of the game—well, at least since Big Bill Tilden. And despite being 12 years older then Jim Courier, he dismissed the two-time Slam champion 6-3. But young James Blake is “just” 33. He was born in ’79, the year when Mac first won a pro tournament. The former American No. 1 used his forehand and his athleticism to turn back a gritty Mac counter-attack, beating the New Yorker 6-3 in the one-set championship match, on a Sacramento night when thousands were grateful to see tennis in person, and a tennis person like no other: John McEnroe.