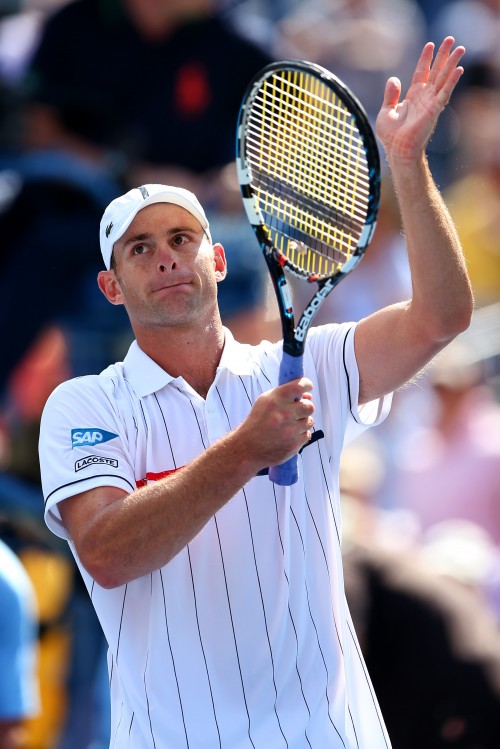 THE MOJO MAN WHO CHASED GENIUSES

His serve – powerful and imposing – was a blur.

His forehand punished and pinned.

His mojo was macho.

His patriotism was clear.

Andrew Stephen Roddick was our braveheart warrior, the last great phenom to emerge in American tennis.

When he first burst on the scene at 19, Rolling Stone gushed saying,  “[Roddick] is the biggest story in tennis this year: half wizard, half boy.”

But the kid became a man. The teen who once was but a ball basher now is nuanced leader and a certified grown-up who wears many a hat: a take-no-prisoners Nebraska Cornhusker zealot, a muscular athlete who could have been a “third and ten” tight end. A guide and big brother, he learned from elders Agassi, Courier and Sampras. He was a leader and buddy for his contemporaries Mardy Fish (who took him down when they played on the same Flordia High School  hoops team) and James Blake (who emptied his wallet when they played poker). More recently, he has been a big brother who has mentored the next generation – John Isner, Sam Querrey and Ryan Harrison.

A boots-on-the-ground Texan who embraced life, he saw a picture of a hot girl in Sports Illustrated’s swimsuit issue and told his agent, “Get me her number.”  Soon Brooklyn Decker gave him her hand.

Roddick loved sports, whether he was at the Super Bowl or bemoaning the collapse of one of his NCAA brackets. Sassy and sharp, often he seemed like the smartest guy in the room. Wise-guy, knowing and outspoken, he didn’t suffer fools and was an equal-opportunity verbal abuser. He bristled when the media had the temerity to wonder if he was considering retiring. When he was asked about Novak Djokovic’s various maladies during the 2008 U.S. Open, he said: “Back and hip. Cramp. Bird flu. Anthrax. SARS. Common cough and cold. You know, he’s either quick to call a trainer, or he’s the most courageous guy of all time.” Touche!

But don’t you dare tell that to U.S. tennis fans. In the post-‘Sampragassian’ era, Roddick was the stand-alone leader of the Red, White and Blue pack. Sadly, the 2003 U.S. Open champion is still the last American to win a Slam, and only Roger Federer can equal Roddick’s mark of having won a tournament for twelve straight years – what consistency. In our era, only Rafa Nadal can match Roddick’s Davis Cup heroism. The stats tell us he won 33 Davis Cup matches, and with his 6-0 record in 2007, he led us to our only Davis Cup title in the last 15 years – a fearless closer. But it is more than this. How many times have we seen Roddick carrying the flag as he battled in some distant land before thousands of hostile fans on the slowest of slow clay courts? He not only was our hero, he changed the culture of Davis Cup. American players, used to find reasons not to play. Now everyone wants in.

Even more than this, Roddick’s “Big Man” arsenal transformed the modern game. When Andy first emerged, his serve was a thunderous wonder, a singular weapon. Now it is but one of many. His forehand was once feared by all. Now there are some who say it is no longer even in the top echelon. More than this, there was the brutal, no excuses reality that Roddick played in the best era in history. Simply put, according to one observer, “Roger Federer made Roddick look like a Buick.” He exposed Andy’s lack of quickness, his stiff backhand, his not-that-subtle touch and limited versatility. Tennis’s greatest “One Slam Wonder” had a $20 million career, but in three Wimbledon finals and the 2006 U.S. Open final, he fell to his nemesis. His epic (16-14 in the fifth set) 2009 defeat to Federer was one of the most noble setbacks since the charge of the light brigade. He lost a match, but gained millions of hearts.

Federer, Nadal and Djokovic would cost Roddick a mantle full of trophies and millions of dollars. Without them on the scene, perhaps he would have dominated. (Think – coulda, woulda, shouda.) Yes, Roddick beat Federer in Miami this year, but he has long understood that the three most important words of the Federerian era are “genius at work.” Roddick bluntly conceded that “Federer has flash, feel, artistry. The advantage I have is just hitting the crap out of the ball.” Years ago after losing to Federer, Roddick quipped, “I want another crack at Federer – until my record is 1-31.” He’s now 3-21.

But this inconvenient truth – that Roddick’s talent was just an agonizing notch below the very best – in an odd way amplified his greatness. For he has long been the game’s grittiest hard hat fighter. A survivor who outlasted many, he practiced harder then he played. He wanted to win so much, sometimes too much. His angst was Herculean. After an Aussie Open loss to Federer he said,  “It was frustrating.  It was miserable.  It sucked.  It was terrible.  Besides that, it was fine.”

Roddick’s game has never been called graceful. Critics howled that it was laden and mechanical, even painful to watch. But we will recall his early “mojo” when he was an unfettered force, the world’s No. 1. We will remember the boy champion at the U.S. Open. We will remember his slow death losses at Roland Garros or battles in a soccer stadium in Seville, Spain, before 27,500 flag-waving partisans. We will picture him diving with reckless abandon on championship point in Memphis and a fateful set point lost in a Wimbledon final. We will forever recall the ecstasy of the Davis Cup triumph in Portland.

Ultimately, Roddick was an overachiever. He brought a fierce, unwavering commitment and a loyalty to his friends, his  sport and his craft. This star was hardly free of vanity. But at his core was a giving generosity.

For years, I had tried to get a one-on-one interview with him. But his “peeps” always deflected my efforts. He heard about it and immediately said to come down to his lakeside Austin home. We not only did an interview, we spent nine hours with him and his slobbering, but delightful, bulldog Billie Jean.

What impressed me wasn’t so much his U.S. Open trophy in a niche in a side hallway, his intense workouts at a threadbare high school track or his no-nonsense practice session on a humble court carved out of a hillside. Rather, what touched me was how he cared, how he sweated the make-or-break details of his grassroots foundation and how he listened and lent support to his young wife who was then struggling in Hollywood.

Go figure. The kid who was once half boy and half wizard was now caring, thoughtful,  giving. Ultimately, Roddick was America’s warrior, a ferocious battler whose intensity sucked up all the oxygen in the room. You felt it in row Z.

Now it is hard to imagine the American game without our leader. But we must. There is no choice. Like one of his 144 mph serves down the T, Austin Andy announced his retirement with speed and certainty – and all of a sudden, the American men’s game seems a bit of a blur.

After all, our wizard is gone.