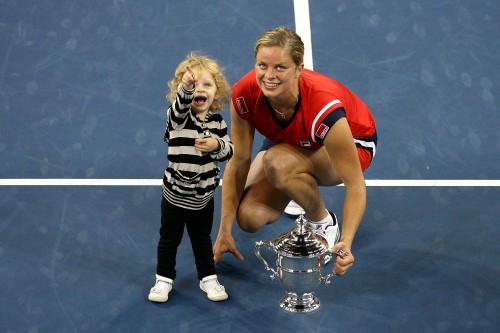 Clijsters celebrating with her daughter on court after winning the 2009 U.S. Open.

REMEMBERING CLIJSTERS, THE QUEEN OF NICE

When Justine Henin was just seven, her mom took her to Paris to see pro tennis. From that moment the Belgian had just one ambition: win the French Open. Others, like Roger Federer or Novak Djokovic, dreamed of winning Wimbledon. For Andy Roddick and most American kids, it was a matter of prevailing at the U.S. Open.

But Kim Clijsters – who will retire (again) after the U.S. Open – always wanted something different from her career; something that had precious little to do with shiny trophies or lofty rankings. Something that didn’t even come on the radar screen of most other players.

Kim wanted friends. She explained that, when all was said and done, those trophies would not be there to share the good times with her.

Of course, Kim was unique. It wasn’t just that, with Henin, she was half of the greatest women’s duo to ever emerge out of a European nation. It wasn’t about her penchant for jock partners – Aussie Lleyton Hewitt and her basketball-playing husband, Brian Lynch. It’s not so much that she is the only player to have twice beaten both Venus and Serena Williams in a single tournament, or that when she won the U.S. Open in 2009, she became the first mom to win a Slam since Evonne Goolagong in 1980.

It was more that. In a too-often snarly world crammed with ‘tude, Kim was simply the Queen of Nice.

She did sweet really well. But she rarely was too saccharine. Her nice was sincere.

Who else would give away 11,000 bottles of champagne to her fans in Antwerp; or buy a Labrador puppy at a San Diego fundraiser for $11,000 and immediately give it to a fan; or be beloved in three disparate nations: her native Belgium, in America where she has won 40 percent of her titles, and Down Under, where the Aussies loved her when she was with Hewitt and still call her “Our Kimmie.”

Did she have a burning fire in her belly to collect every title on the WTA shelf? No way. Pam Shriver said, “I can’t help but think that if Kim loved the battle, loved the warrior aspect of big matches, she would not be talking about retirement at age 23. But she doesn’t. Sharapova does. And so does Serena.”

Yes, Kim was the No. 1 player in the world for 20 weeks. But if her ranking dipped, it didn’t seem to matter that much. Instead – more than any player this side of Federer – she was lauded for her dignity, her courtesy and her “girl next door” friendliness. How kind can you get? From Goolagong to Chrissie Evert to Ana Ivanovic, many have proven you can be more than personable and still win. But Kimmie was something else: the game’s perpetual Miss Popularity.

This doesn’t mean she steered clear of all controversy. The Flemish daughter of a star soccer player had a chippy, often chilly, relationship with her fellow Belgian Henin. Her late father Leo and Henin’s coach Carlos Rodriquez and the French-speaking Henin, who won seven Slam titles, said she and Clijsters were “co-workers but it stops there.”

When Kim’s young boyfriend Hewitt implied at the U.S. Open that an African American linesman was probably favoring James Blake, she defended her man, saying: “He was the one who got blamed for being a racist, while he was sort of telling the umpire that the linesman was being racist a little bit.” Some in the press were unkind and took it to the kindest lady in the game. One critic claimed Kim “backed out [of the game] sniping and carping, like some disgruntled peasant milkmaid rueing her lot and making poisonous accusations.” Ouch.

When reflecting on players who suddenly drop out of tennis to pursue the joys of domesticity, writer Peter Bodo suggested fans check out Clijsters’ imaginary website: “I’mgettingmarriedandhatetennisandI’mdyingtohavekidsandIlovepuppies.com.” Not surprisingly she wrote when she retires there happily will be “no more gossip or lies in the newspapers.” But even fans who adored her bristled when she spoke of the joys of domesticity. Signs in the Melbourne stands reminded her, “Our dishes are dirty, too.”

Purists can nitpick about Clijsters’ career. By the standards of her day, it took her a while (seven years) to win her first Slam. She lost in four Slam finals and never won the French Open, Wimbledon or at the Olympics. But in 2009, after a two and a half year sabbatical, as an unseeded wildcard she won the ’09 U.S. Open after just two warm-up tournaments. For a couple of years she was considered the best hard court player in the world.

Yes, she suffered injury after injury: wrist, hip, ankle, abdomen. Few other athletes in any sport brought a more benign playbook. On court she was best known for her screeching gymnastic splits (which even Djokovic couldn’t duplicate.) But her essence – her true legacy – is captured in one of the sweetest photos in sports history: the shot of her with her 18-month daughter, Jada, sharing the bliss of her high profile/big stage win at the ’09 U.S. Open. The inspired photo is a mother and daughter picture like few others.

Then again, the Queen of Nice was a tennis Royal like few others.

THE QUEEN OF NICE: AN ANTHOLOGY

A NOT-SO-ADEPT MEDICAL ANALYSIS: When Clijsters was stiil engaged to Hewitt, commentator Mark Woodforde said she probably suffered her wrist injury “from carrying her [huge engagement] ring around.”

POP QUIZ: Question: What did Serena Williams say when she was asked if, like Kim, she could imagine having a baby and still go on playing. Answer: “If that means I have to pop one out and keep going, I guess I will.”

DOUBLE PREGNANCY: Both Kim and her mother were pregnant at the same time … Clijsters’s physiotherapist said she was 40 percent stronger after giving birth to her daughter.

COMEBACK COMMENTARIES: Clijsters’ comeback may not have been quite as dramatic as those of Monica Seles, Jennifer Capriati or Serena. Still her return in 2009, after more then two years off the tour, stirred comment. Roger Federer said, “It’s like riding a bike; once you know how … you never forget. That’s why I’m not that surprised. It’s a beautiful story.” Serena said that it looked as if Kim was gone “for just a couple of weeks.”

KIM ON TODAY’S GAME: Clijsters said, “A lot of the young girls coming up have a very similar type of game. They hit the ball very hard from the baseline, but I don’t see them having a backup plan when things aren’t going well. I don’t feel they have the ability to mix their game up when their game isn’t working.”

BACK TO BACK: Clijsters’ and boyfriend Hewitt’s victories in the WTA Championships and the ATP Championships in consecutive weeks in 2002 were the best “love matches” in tennis since Jimmy Connors and Chris Evert both won Wimbledon in ’74 and Andre Agassi and Steffi Graf (who would soon become a couple) both won the French Open in ’99.